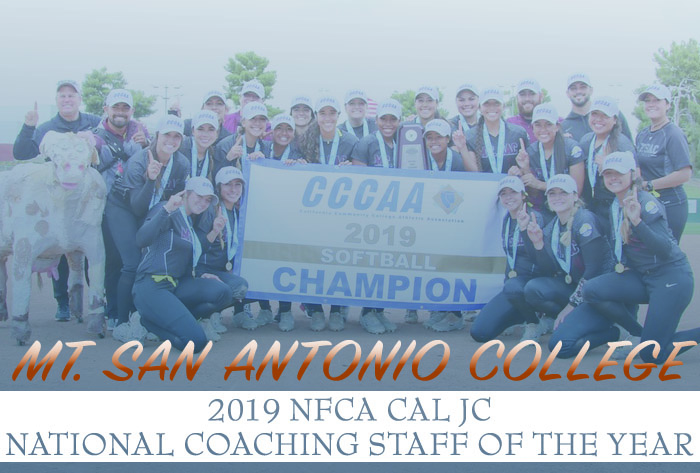 LOUISVILLE, Ky. – Guiding Mount San Antonio College to a second straight CCCAA State Championship, Rubilena Rojas and her staff have been named the 2019 NFCA Cal JC National Coaching Staff of the Year. Under the guidance of Rojas and assistant coaches- Jim Bollier, Alex Mascarenas and PJ Leon - the Mounties (44-5) collected their second title under Rojas and the sixth overall.

Mt. SAC continued its stranglehold on the South Coast Conference North, posting a perfect 22-0 mark in league play to capture the program’s fourth SSC North title and 12thoverall. Rojas, who is in her seventh year at the helm, earned her fourth straight SSC Coach-of-the-Year honor after she guided the Mounties to their second perfect run through conference play.

For the second straight season, Mt. SAC defeated Palomar in the title game, coming out on top 7-4 in 2019. The Mounties posted an 8-1 mark during their playoff run, including seven straight victories to close out the season. It marked the fifth straight 40-win season under Rojas as Mt SAC won 22 of its final 23 games.

Regional Coaching Staffs of the Year

Guided the Hornets to the program’s first State Championship appearance since 2005, finishing 1-2 at the tournament… Swept Canyons in Regionals… Keyed by a pair of sixth-inning rallies, Fullerton bounced back from an opening loss at El Camino to move on to the final eight… Finished second in the Orange Empire Conference… 38 wins are the most since 39 in 2002.