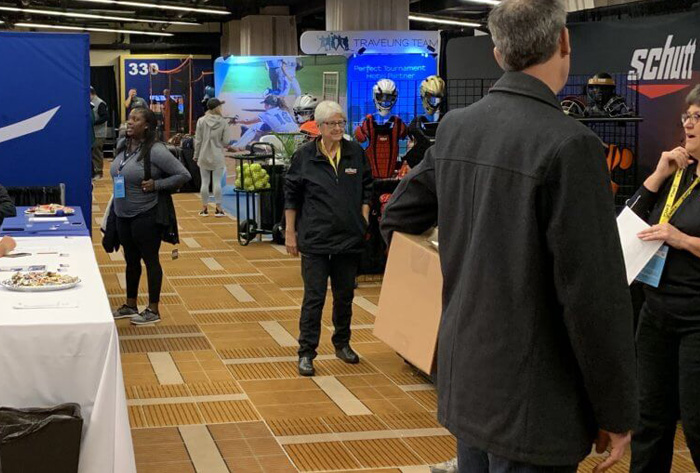 LOUISVILLE, Ky. – Every year the NFCA Convention (Dec. 4-7) provides attendees with direct access to  companies promoting innovative products, apparel and services. The 2019 Exhibit Show (Dec. 5-6) allows those attendees to create positive relationships with exhibitors that can be beneficial in the future.

Held at Harrah’s Resort Atlantic City, this year’s Convention houses the largest softball-only exhibit show in the country where vendors will showcase their products and services. Sold out for the fourth consecutive year, the show features 135 vendors with 38 first-time companies. Additionally, brand-new educational opportunities will grace the Exhibit Hall in 2019, as companies will rent demonstration space within a batting cage located in the back of the hall.

Of those exhibitors, the NFCA welcomes 26 of its 28 sponsors and partners to the Convention, including Official Convention Sponsors – Premier Girls Fastpitch (PGF), USA Softball, Sports Attack and ScrapYard Sports – along with Diamond Kinetics, who is the lead sponsor on the Convention App and HitTrax, sponsor of the home run derby in the Exhibit Hall.

Longtime partners – Diamond and Schutt Sports - sponsor events, Easton is the lead on the NFCA’s Assistant Coaches of the Year and academic awards, while Wilson supports youth education, sponsoring the Grassroots Summit and the High School/Travel Ball joint caucus.  Additionally, Triple Crown Sports supports the Rookie Orientation. You’ll find the rest of our sponsors and partners in the Exhibit Hall.

The Exhibit Hall doors open Thursday at 11:00 a.m. After checking out all the latest products, apparel and services, enjoy free beer and soft drinks during the ScrapYard Sports Happy Hour (5-6:30 p.m.). If you don’t get a chance to make it over on Thursday or if you want to return for a second go-around, doors open 90 minutes earlier this year at 7:30 a.m., so grab a bite to eat and shop around.

Be sure to stop by Sports Attack’s booth 401 for a chance at a Junior Hack Attack pitching machine, which will be raffled off on Friday between noon and 12:50 p.m. You can also head to the batting cage at the same time for HitTrax Presents: Home Run Derby with the Pros, which will also have refreshments and snacks.

Last but not least, don’t forget about our digital silent auction, which is back for a second year.The highly-anticipated event in the Exhibit Hall allows you to bid on your favorite items from the comfort of your phone by stopping by each booth. Find your favorite companies or Convention promotion, scan the QR code and make a bid, but hurry, bidding closes at 1pm on Friday!

- In addition to the raffle, Sports Attack is the official sponsor for all clinic sessions. Over four days, learn valuable drills and tips from some of the best speakers and smartest minds in our game today.

– Title sponsor of the Softball Ball Summit- An open forum that affords the entire membership an opportunity to discuss business and relevant issues across the landscape of softball. Additionally, NCAA Secretary-Rules Editor Vickie Van Kleeck and NCAA National Coordinator of Softball Umpires Craig Hyde will present to the membership along with other softball dignitaries.

- Sponsoring the 2019 Convention App, which will be your guide to everything going on during the week. Also announcing the winner of the technology scholarship as well as the presenting sponsor of Jodi Hermanek’s “Five Ways to Build Your Program Using Technology” session.

and FieldTurf, along with partners - Bownet

, Stack Sports, Clell Wade Coaches Directory and Blast can be foundwith our other sponsors in the Exhibit Hall.