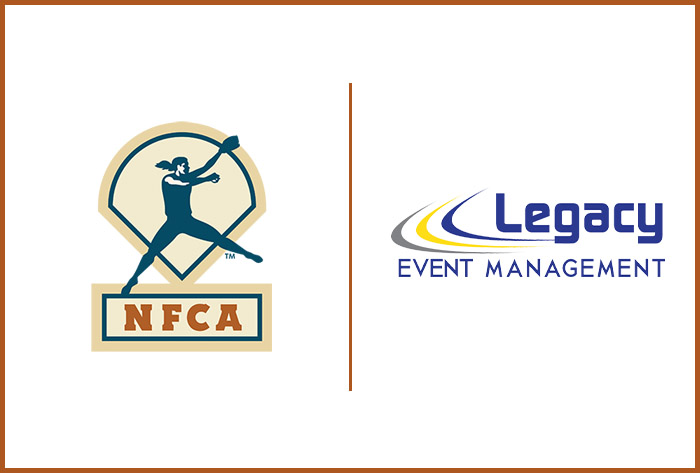 LOUISVILLE, Ky. - The NFCA is pleased to announce that Legacy Event Management

has renewed as an NFCA Official Sponsor. Legacy, a premier sporting event management company, will be the title sponsor of the social hours for the 2023, 2024, and 2025 NFCA Nashville and Kansas City Coaches Clinics.

"The NFCA continues to be an innovative resource for the fastpitch softball community,” said Will Tomasello, Founder and Director, Legacy Event Management. “What makes it so effective is that it not only provides a platform for our business to connect to college coaches, travel ball organizations, umpires and other fastpitch companies; it also offers unmatched programs and services to advance the sport. We are proud to partner and sponsor with the NFCA  as their mission and core values align with Legacy's.  We are committed to providing elite level events and offering a platform to advance young players to the next level of the sport.”

Additionally, the Association will continue to provide a camp (NFCA Atlanta EXCEL Camp), on the day prior to the Atlanta Legacy Tournament. It is part of a group of five student-athlete camps the NFCA offers each summer/fall.

“We are thrilled to have Legacy Event Management continue as an NFCA Official Sponsor,” said NFCA Executive Director Carol Bruggeman. “Legacy is committed to developing and executing first-class, high-quality events in the fastpitch community.  Their organization, like the NFCA, equips student-athletes and coaches with opportunities to thrive through various softball events.  Will Tomasello and Becky Massave are outstanding partners who are committed to the growth of fastpitch softball.”

In addition to the camp offerings, the NFCA hosts a series of eight Coaches Clinics during December and January. Following the Chicago I Coaches Clinic on Dec. 2-3, 2022, the remaining seven – Nashville, Minneapolis, Oklahoma City (new), Chicago II, Portland, Kansas City and Louisville - will take place in January of 2023.

The NFCA (National Fastpitch Coaches Association) is the professional organization for fastpitch softball coaches. Known for its highly-regarded Coaches Clinics, the NFCA also educates and supports softball coaches on a variety of different levels: from podcasts to a comprehensive drills database, to NFCA Webinars and a National Convention.