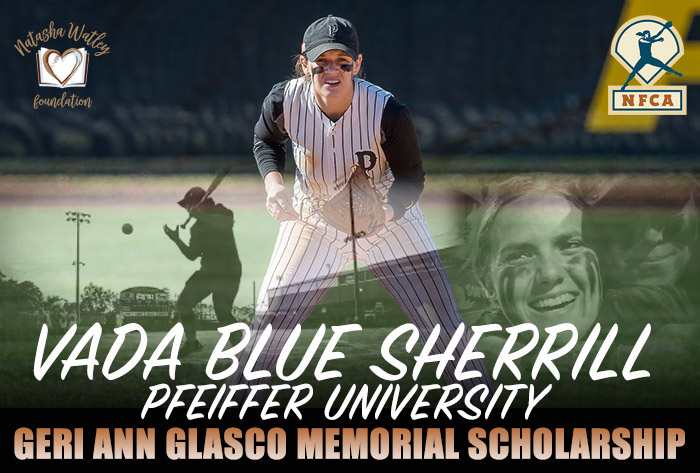 LOUISVILLE, Ky. — The NFCA is pleased to announce that Pfeiffer University assistant coach Vada Blue Sherrill is the inaugural recipient of the Association’s Geri Ann Glasco Memorial Scholarship, which was created in partnership with the Natasha Watley Foundation (NWF) and the Glasco family.

Each year, the scholarship is awarded to one female assistant coach in the first five years of her career at the collegiate level. The scholarship covers costs associated with attendance to the NFCA National Convention in December, including registration fees, travel, and rooming costs. It is dedicated to remembering the aspiring coach and elite former student-athlete, who lost her life in a multi-vehicle accident on Jan. 24 in Lafayette, La.

“I’m incredibly thankful for the honor,” Sherrill said. “I’m so stoked about it. I never personally knew Geri Ann, but just know her impact. It’s not just softball.”

The star shortstop was a two-time NFCA All-American and a finalist this past season for the Schutt Sports/NFCA Division III National Player of the Year award. She completed her Falcon career as the school leader in every major offensive category and became the only person in NCAA history, regardless of division, to reach 200 hits (251), runs scored (255), RBI (200), and stolen bases (201).

Sherrill was initially planning to become a teacher, but coaching combines teaching with her other love: softball.

“I graduated in May, and the (assistant) job was open and I didn’t want to step away from (softball) just yet. I love the sport,” she explained. “The program is something I take pride in. I wanted to invest in the players.”

The scholarship also allows her to attend this year’s Convention on Dec. 4-7 in Atlantic City, N.J., with her dad, Monte, a longtime high school and college coach, and her coach throughout her playing career.

“Vada is very deserving of the scholarship,” Monte Sherrill said. “She has been a coach on the field for her entire career, but is moving to the real coaching ranks, and I am trying to get her off to productive start.”

“I have been unable to attend the Convention for the last several years, due to my Pfeiffer budget. The only way Vada would be able to go to the Convention is with this scholarship. She will be a superstar coach in a few years and I want her to see how the NFCA works.”

Even though they have vastly different levels of coaching experience — her dad has more than 800 wins, and she is just getting started — Vada sees both of them benefiting from this opportunity.

“Dad has been my only softball guru, so it’s definitely a great opportunity to branch out and hear (other perspectives),” she said. “I got giddy just looking at the schedule. As a new coach, I’m going to be a sponge.”

Sherrill said it has been a dream of theirs to coach together someday.

“We had always talked and fantasized about that,” she said. “Me and dad, we’ve been doing this together for so long. Softball, it’s kind of our niche. It’s a good opportunity and I’m grateful I get to share it with him.”

The four-time NFCA All-Region honoree played at Georgia in 2013-14 and Oregon in 2015-16, had a passion for the game of softball and a love for the softball community. She was just weeks away from joining her father and Louisiana head coach, Gerry Glasco, in the Ragin’ Cajuns’ dugout as a volunteer assistant coach.

ABOUT THE NATASHA WATLEY FOUNDATION

The Natasha Watley Foundation (NWF) was founded by two-time Olympic medalist Natasha Watley to create opportunities for girls in under-served communities to learn and play the game of softball. NWF uses the medium of sport to inspire young women to reach their full potential while fostering character development and awareness of social issues that affect women.