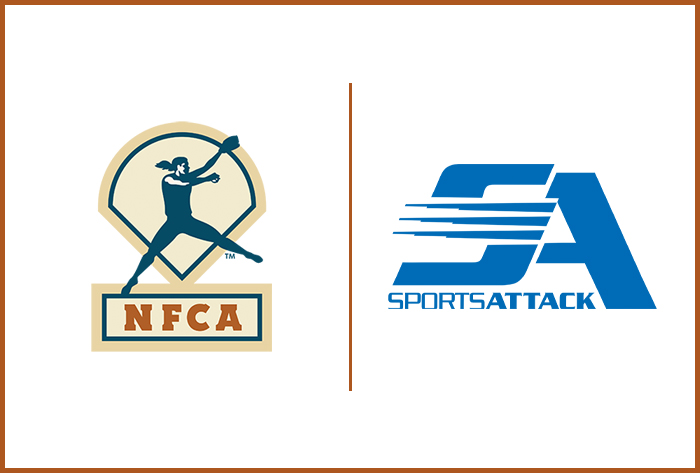 LOUISVILLE, Ky. - The NFCA is excited to announce Sports Attack has renewed as an Official Sponsor. Signing a multi-year deal, Sports Attack continues its longstanding partnership with the Association as the title sponsor of the NFCA Convention’s clinic sessions.

“Our team here at Sports Attack are very proud of the relationship we have developed with the NFCA,” said Lorne Buck, Sports Attack Vice President of Marketing. “We are excited to continue the partnership and offer support towards the mutual goal of continued growth for fastpitch softball coaches at all levels.”

Sports Attack, a staple at the Convention and Exhibit Show, values its commitment at the Association’s largest gathering of softball coaches and exhibitors in the country. Attendees will find Sports Attack’s signage on stage during speaker sessions, while a crowd gathers annually at its booth with the Junior Hack Attack pitching machine on display in anticipation of one lucky attendee winning it and having it shipped directly to their doorstep.

"We are thrilled to have Sports Attack renew as an Official Sponsor,” said NFCA Executive Director Carol Bruggeman. “They have a substantial presence at our annual national Convention, also known as the 'Greatest Softball Show on Earth!' As the title sponsor of our well-attended Convention clinic sessions and the exciting Junior Hack Attack raffle in the Exhibit Hall, their investment and support of the NFCA is well-known and much appreciated. Lorne Buck and the entire Sports Attack team are committed to the growth of the sport and we look forward to working with them over the next three years."

Celebrating 40 years in 2023, the NFCA (National Fastpitch Coaches Association) is the professional organization for fastpitch softball coaches. Known for its vast  library of digital education, the NFCA also educates and supports softball coaches on a variety of different levels: from podcasts to an extensive Awards & Scholarships platform, to NFCA Webinars and a National Convention.