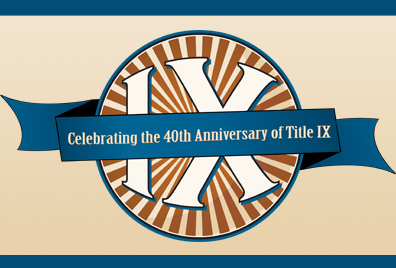 Many players don't know how lucky they are... how they get to play a sport they love; have uniforms and equipment; fields to play and practice on; coaches who teach the game, AND a chance to play college softball on a scholarship that could pay some or all of a college tuition.

For many girls, it wasn’t like that 40 or 50 years ago before the passage of Title IX, which refers to Title IX of the Educational Amendments of 1972.  It was landmark legislation that was passed by Congress to ban sex discrimination in schools, whether it be in academics or athletics.  The language states:
"No person in the U.S. shall, on the basis of sex be excluded from participation in, or denied the benefits of, or be subjected to discrimination under any educational program or activity receiving federal aid."

In the late 1960’s, things were looking pretty sad for girls who wanted to participate in athletics.  In most states, high school and college programs for girls’ athletics were non-existent.  For those who were able to play, sometimes it consisted of “play days” where lots of colleges would get players together for a day to play with other colleges at a central location.  Mary Littlewood, who wrote the NFCA-published book “Women’s Fastpitch Softball – The Path to the Gold,” described play days like this:

Once Title IX was passed and schools started realizing the impact, the Association of Intercollegiate Athletics for Women (AIAW) formed to govern national championships for women’s sports. In the 1980s, after several years of an ongoing struggle between the AIAW and the NCAA, the NCAA started offering women’s championships.  The first NCAA Division I Women’s Softball Championship, known today as the Women’s College World Series, was in 1982.

So, when you see a player pick up her glove and bat and head out to the field, remind her that it shouldn't be taken for granted. Tell her to enjoy it to the fullest and remember the work of those who came before her!