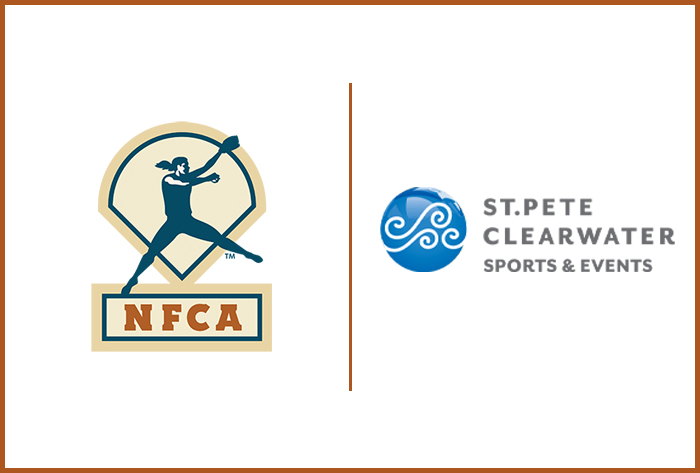 LOUISVILLE, Ky. — The NFCA is pleased to announce Visit St. Pete/Clearwater (VSPC) has renewed as an Official Sponsor. VSPC continues as the lead sponsor on the Association’s annual print calendar and digital calendar.

"We are elated to have Visit St. Pete/Clearwater renew their Official Sponsorship,” said NFCA Executive Director Carol Bruggeman. “The St. Pete/Clearwater area provides a first-class destination for softball coaches, players, and fans. There is no doubt softball teams enjoy competing in the warm Florida weather, however it's the hospitality of the St. Pete/Clearwater staff that keeps them coming back. VSPC offers a pleasant welcome and a high-quality experience both on and off the softball field.  Additionally, the NFCA has hosted various well-attended divisional Leadoff Tournaments in the St Pete/Clearwater region. Caleb Peterson, Craig Campbell, and the entire VSPC staff are committed to serving the softball community with excellence."

Each year, NFCA members receive access to both a digital calendar and printed calendar. The digital calendar allows coaches to have important Association dates (awards, championships, clinics, camps and Convention) at their fingertips. The print version highlights member coaches from all divisions across the country with images submitted by member institutions.

“We’re thrilled to partner with the National Fastpitch Coaches Association (NFCA) once again,” said Visit St. Pete/Clearwater CEO & President, Steve Hayes. “VSPC believes in the impact that NFCA makes on the sport of fastpitch softball and the development of young, competitive athletes. We are excited to showcase our award-winning destination to the NFCA membership and event portfolio.”

World-class beaches and 24 dynamic communities packed with culture and adventure await in St. Pete/Clearwater, the jewel of Florida’s Gulf Coast, only 90 miles west from Orlando. Situated on a sun-drenched peninsula separating the Gulf of Mexico from Tampa Bay, the area has received more than 30 awards in the past decade for its pristine white-sand beaches, including two St. Pete/Clearwater beaches in the Top 10 on TripAdvisor’s 2021 Best Beaches in the U.S. – No. 1, St. Pete Beach, and No. 9, Madeira Beach. Culture shines here too, from institutions like St. Pete’s Dalí Museum, housing the largest collection of the famed surrealist’s works outside Spain, to a burgeoning street-art scene that’s drawing international acclaim. The vibe is alive in St. Pete/Clearwater. Start planning your next vacation at VisitStPeteClearwater.com. #LiveAmplified

The NFCA (National Fastpitch Coaches Association) is the professional organization for fastpitch softball coaches. Known for its highly-regarded Coaches Clinics, the NFCA also educates and supports softball coaches on a variety of different levels: from podcasts to a comprehensive drills database, to NFCA Webinars and a National Convention.