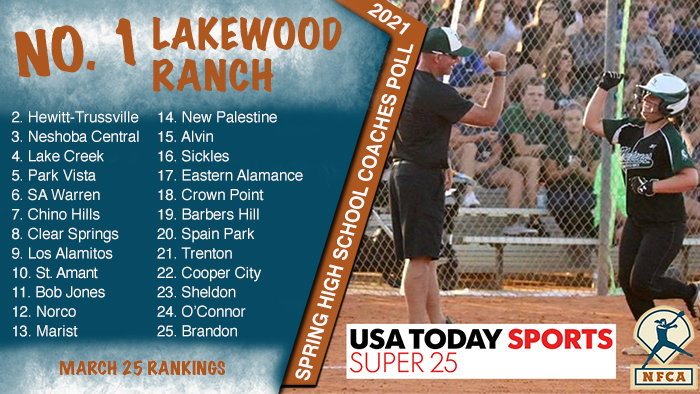 LOUISVILLE, Ky. — Top-ranked Lakewood Ranch was idle and there was no movement among the first seven teams in Thursday’s USA TODAY Sports/NFCA High School Super 25 poll.

An early matchup between perennial California powers Los Alamitos (4-0) and Norco (1-1) on Tuesday was taken by the Griffins, 8-4, to swap their order again this week in the rankings, while the (8-0) Gryphons of Florida’s Sickles High kept winning to earn a place in the Super 25 this week.

Texas’ Clear Springs (17-0) was the other newcomer to the rankings, after Tuesday’s 11-1 rout of Clear Brook gave the Chargers their ninth double-digit scoring game of the season. Shawnee Heights and Oshkosh North, who haven’t started their season yet, dropped out this week, but are expected to return once they get rolling.