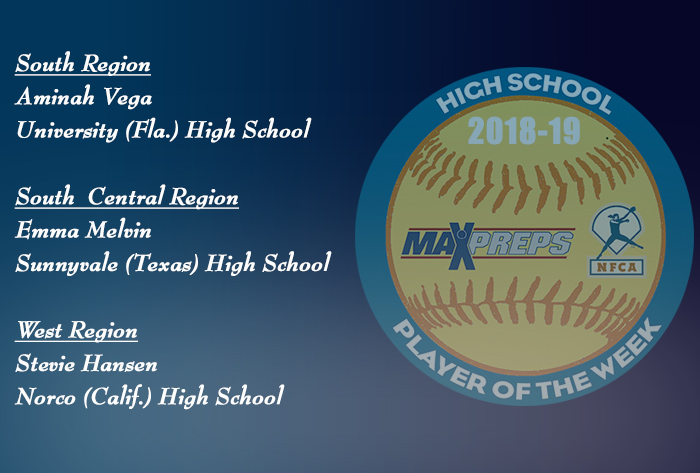 Making her high school debut, Vega hit .833 with 10 hits, three doubles, a triple, two home runs and seven RBI to help the Titans pick up three wins during their opening week of play. In her first game, Vega went 3-for-3 with a triple, homer, three RBI and a run scored versus New Smyrna Beach. She recorded four hits, a double, RBI and two runs scored in a 6-5 triumph over Taylor. Vega capped off the week with three more base knocks, doubling twice and homering against Atlantic. She drove in three more runs and scored twice in the 7-1 win.

Melvin, who is also a freshman, helped her squad to a 3-1 week by batting .800 (8-for-10) with two doubles, three long balls, 15 RBI and a 1.900 slugging percentage. She also scored five times, did not strike out and drew three walks to post a .846 on-base percentage. In an 18-15 win over Rowlett, she went 4-for-4, with two doubles and five RBI. She left the yard against Kaufman, Ford and Van Alstyne. Melvin drove in four runs the latter two contests, while scoring twice versus Kaufman.

Hansen twirled a pair of perfect games and allowed just one baserunner in three appearances last week. In her first start of the season against Claremont, she retired all 21 batters with nine strikeouts during a 4-0 triumph. Hansen continued her perfection in a five-inning win over Rancho Cucamonga, fanning 12 of the 15 batters she faced. In her other appearance, a runner reached via an error, but she calmly struck out the side. The sophomore hurler, struck out 24 and faced one batter over the minimum in 13 innings of work.