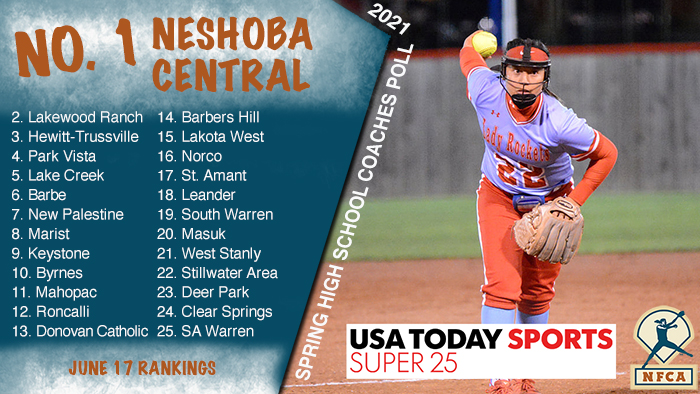 The (27-2) Cougars dropped in the rankings after a 7-2 playoff loss to Esperanza last Thursday. There was no other movement in the Top 25 — led by unbeaten eight-time Mississippi state Class 5A champion Neshoba Central — as most teams have already finished their season.

No. 8 Marist (36-1) gained one spot in the rankings after a pair of lopsided Illinois playoff victories. The Redhawks rolled past York, 11-1, in last Thursday’s sectional final, then routed Taft, 10-0, in Monday’s super sectional matchup. Marist faces Huntley today in the Class 4A state semis.

Mahopac (19-1) also moved up one spot, to 11th, after finishing its season with its first Section 1 crown. Notre Dame-bound senior pitcher Shannon Becker struck out 18 and freshman shortstop Ava Lichtenberger threw out a runner at home in the top of the 10th, then won the game with a walk-off single in the bottom half, as the Indians defeated North Rockland, 1-0, last Saturday. That was the end of the line for Mahopac, as New York ended its high school softball season this year at sectionals, opting to not hold the state tournament that would normally follow.

Ally Walesky hit two homers and Keagan Rothrock fanned 16 batters to power Roncalli (31-2) past Lake Central, 4-1, in the Indiana Class 4A final, and make the No. 12 Royals the first team from the Hoosier state to win crowns in three different classifications. Roncalli has won four state titles overall, capturing the state 3A crown in 2011 and claiming the Class 2A title in 1999 and 2001.

Donovan Catholic (26-1) will play Immaculate Heart Academy in Friday’s New Jersey State Interscholastic Athletic Association non-public Group A final, after beating St. John-Vianney, 10-0, last Thursday, and St. Thomas Aquinas, 2-0, on Monday. A win would put the Griffins in the Tournament of Champions this weekend, where all the various winners compete to decide the best high school squad in New Jersey.

Elsewhere, Masuk (24-0) wrapped up an undefeated season with a 2-0 victory over St. Joseph in last Saturday’s Connecticut Interscholastic Athletic Conference Class L final, while top-seeded Stillwater Area (23-2) was stunned by unseeded Forest Lake, 8-5, in the Minnesota Class 4A quarterfinals.