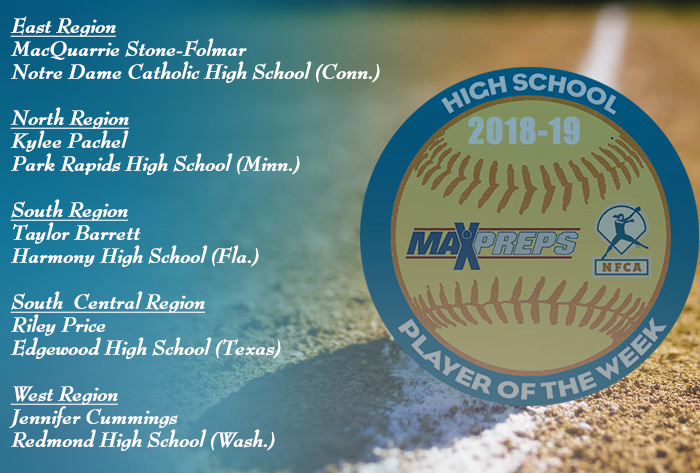 East Region
Stone-Folmar hit .900 with four doubles, four home runs, 13 RBI and nine runs scored. She slugged 2.500, connecting on two doubles and two home runs in wins over Bunnell and Immaculate. Stone-Folmar was 5-for-5 with five RBI and five runs scored versus the Mustangs. Against the Bulldogs, the sophomore drove in eight runs and scored four times.

North Region
Pachel was 9-for-10 at the plate with four doubles, three home runs, 10 RBI and four runs scored. The senior catcher slugged 2.200 and register a .909 on-base percentage. Pachel was a perfect 4-for-4, drove in a season-best six runs with three of her doubles, a long ball and two runs scored versus Wadena-Deer Creek. She homered and drove in two runs apiece in each game of a doubleheader sweep of Crosby-Ironton.

South Region
Barrett keyed the Longhorns to a pair of wins last week with her arm and her bat. She finished 2-0 with a 0.00 ERA and 31 strikeouts in a pair of complete game outings. The junior hurler fanned 15 and walked two during a one-hit shutout of 1-0 Okeechobee in a game that saw Barrett’s fourth-inning solo home run provide the only run of the game. In her first start of the week, Barrett tossed a three-hitter with 16 punchouts and one free pass in a 4-1 victory over Lake Nona. She held her opponents to an .082 batting average in 14 innings of work.

South Central Region
Price held Palmer High School without a hit and allowed just two base runners in a doubleheader sweep. She struck out 21, walked two as sophomore hurler twirled a perfect game and a no-hitter. Additionally, Price was 5-for-7 at the plate with a pair of doubles, six RBI and a run scored. The perfecto came in game two as she fanned eight and retired all 15 batters she faced, while doubling twice and driving in three runs. In the opener, Price recorded 13 strikeouts and issued two free passes. At the plate, she registered three more RBI and a run scored.

West
Cummings was a perfect 10-for-10 and reached base safely in all 15 plate appearances, keying the Mustangs to a 4-0 week. The junior recorded four doubles, three triples, eight RBI, eight runs scored, five walks and a 2.000 slugging percentage. Cummings posted three-hit games against Issaquah and Mount Si. She drove in three runs and scored three times with two doubles and triple versus Newport-Bellevue.