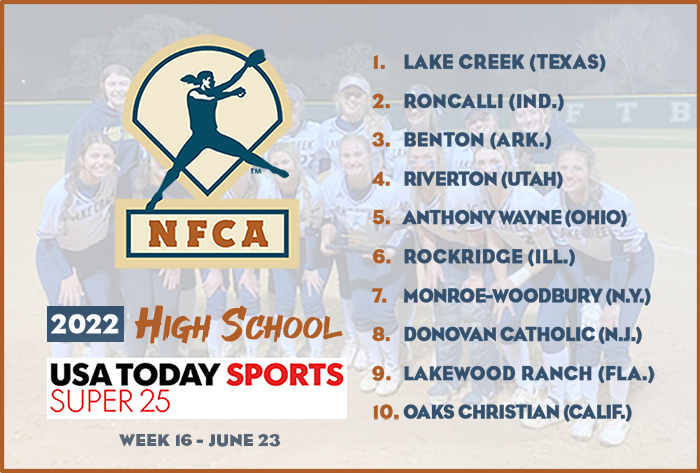 No. 6 Rockridge (35-0) and seventh-ranked Monroe-Woodbury (26-0) are the other two teams in the poll who did not lose a game this season. Rockridge is the first Illinois team to have back-to-back unbeaten seasons, while the New York state Class AA titlist Crusaders will look very different next year without star pitcher Brianna Roberts and potentially also her mom, head coach Penny Roberts, who is mulling whether she wants to continue leading the squad.

Utah’s Riverton (28-1) and Ohio’s Anthony Wayne (30-1) remained highly regarded despite having one blemish on their record in the fourth and fifth positions, respectively, while No. 8 Donovan Catholic (30-1) suffered its lone loss to fellow state titlist Haddon Heights in New Jersey’s Tournament of Champions. The Griffins had just won a third-straight state Non-Public A crown and were riding a 48-game win streak at the time.

Ninth-ranked Lakewood Ranch (30-2) avenged two early losses to Lake Brantley with a 8-2 victory over the Patriots in the Florida state Class 7A championship, and No. 10 Oaks Christian (34-1) closed the year with three California playoff triumphs after a mid-May loss to Los Alamitos snapped the Lions’ 31-game win streak.