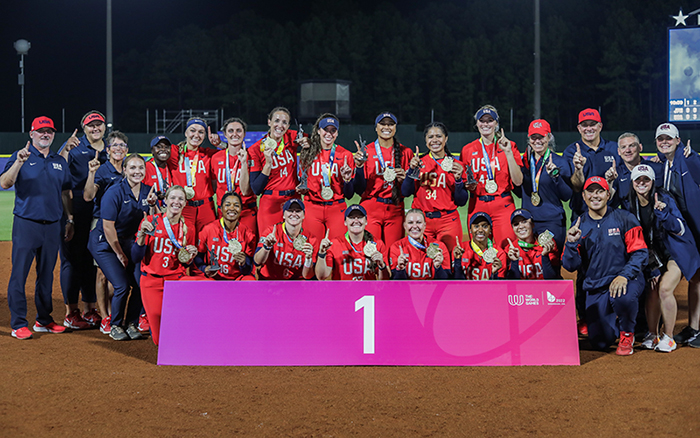 BIRMINGHAM, Ala. - The USA Softball Women’s National Team (WNT) topped Japan, 3-2, to claim the 2022 World Championship title in front of over 8,000 fans at Hoover Met Stadium.

Behind a combined 10 strikeouts from Monica Abbott and Ally Carda and a three-run double off the bat of Janae Jefferson, the Red, White and Blue Team earned its third straight championship following its gold medal finishes at the 2016 and 2018 WBSC World Championships.

Jefferson's clutch bases-clearing double in the third came after Japan threatened but did not score in the first two frames, stranding five runners. Japan pushed across single runs in bottom of the third and fifth innings to cut its deficit to one run.

Carda, who relieved Abbot with a runner on second base in the fifth, allowed a single that made it a 3-2 contest. Following that base knock, she fanned seven batters and allowed just a single to close it out for Team USA.

The Red, White and Blue put on a strong showing throughout the World Games with a .331 team batting average as Deja Mulipola led the squad hitting .615 followed by Haylie McCleney at .533 and Kinzie Hansen with a .417 average. The Eagles' pitching staff of Abbott, Carda, Megan Faraimo, Jailyn Ford and Montana Fouts allowed a only four runs through five games. Carda led the staff with 19 Ks followed by Abbott with 17 and Fouts with 13.

Racking up a total of five RBI, four runs scored, eight hits and two doubles in front of her hometown crowd, McCleney was named the 2022 World Games Softball Tournament MVP.

The NFCA (National Fastpitch Coaches Association) is the professional organization for fastpitch softball coaches. Known for being a one-stop shop for fastpitch softball, the NFCA educates and supports softball coaches on a variety of different levels: from podcasts to a comprehensive drills database, to in-person events and a National Convention.