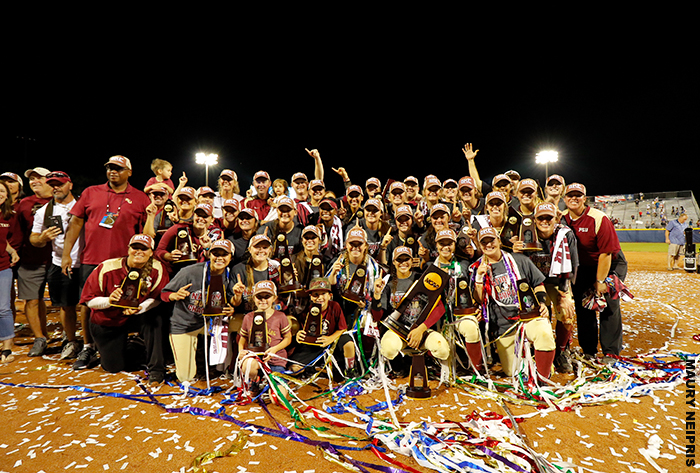 OKLAHOMA CITY – Behind eight unanswered runs, Florida State captured its first NCAA Division I national championship with an 8-3 victory over Washington on Tuesday evening at ASA Hall of Fame Stadium. The Seminoles (57-12) swept the WCWS Championship Series and become the first program from the Atlantic Coast Conference to win a national title in softball.

After falling behind 3-0 in the top of the first, game-one offensive hero Anna Shelnutt drove a two-run homer to center to cut FSU’s deficit to 3-2 and give the Noles the momentum they would need.

It didn’t take long for the Seminoles to grab the lead as they forged ahead for good, 5-3, in the bottom of the second. Elizabeth Mason drove in the first run with a RBI single to right. When her hit was misplayed, Cali Harrod scored the go-ahead run. Jessie Warren stepped up and knocked in Mason with a single.

Mason and Warren went yard in the fourth to push FSU’s lead to 8-3. Mason drove a two-run homer to center and after a pitching change, Warren connected on a solo shot to centerfield

In the circle, Meghan King (26-6) shook off the three-run first inning and provided a strong complete-game effort. The southpaw surrendered an earned run on five hits with four strikeouts and three walks. After the first, King retired the side in four of the six innings and allowed just three base runners.

The Huskies finished their season at 52-10. Taran Alvelo (23-5) suffered the defeat in 3.1 innings of work. She allowed seven runs, six earned, on seven hits with four strikeouts and a walk. Five different Huskies recorded a hit, while Noelle Hee and Taryn Atlee registered an RBI apiece.