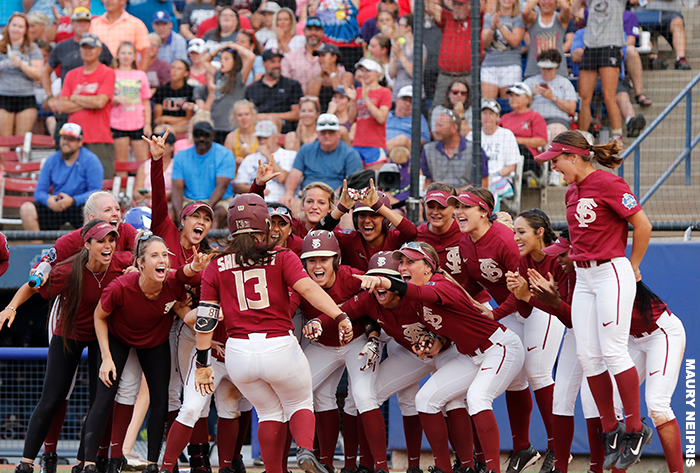 The Seminoles (56-12) have won five straight at the WCWS and are now one win away from the program’s first national championship. Game two is scheduled for 7 p.m. ET tomorrow night.

King, who retired 14 of the final 17 batters she faced in the complete-game shutout, scattered five hits, struck out six and walked two as she improved to 25-6 on the year. The southpaw has not given up an earned run her last 34 innings, including all 27.1 innings she has pitched at the WCWS.

Shelnutt delivered the only run of the game with her leadoff home run in the sixth. It marked the first time Washington has trailed in this year’s WCWS. Jessie Warren, who doubled twice, also provided the defensive play of the game in the bottom of the seventh.

After Washington’s Taryn Atlee led off the seventh with a single back up the middle, Trysten Melhart attempted to sacrifice her over. Warren would make sure that didn’t happen. Charging in on the play, the senior third baseman layed out and made a diving snag and immediately threw to first for the double play.

Gabbie Plain (22-5), who provided another solid outing for the Huskies (52-9), suffered the loss. She allowed a run on five hits with six punchouts and three walk

Both teams threatened in the third inning. FSU’s Morgan Klaevemann led off the top half of the frame with a single, stole second and moved to third on an error. She would not move as Plain induced back-to-back pop ups and struck out Carsyn Gordon to end the frame.

In the bottom half, the Huskies put runners on the corners with one out and after Taylor Van Zee stole second there were two runners in scoring position. Just like the top half, those two runners stayed put as Meghan King fanned Julia DePonte and Kirstyn Thomas to stop the threat.

The Noles loaded the bases in the fourth but couldn’t score as Plain was able to get out another jam.

Kelly Burdick was 2-for-2 for the Huskies.