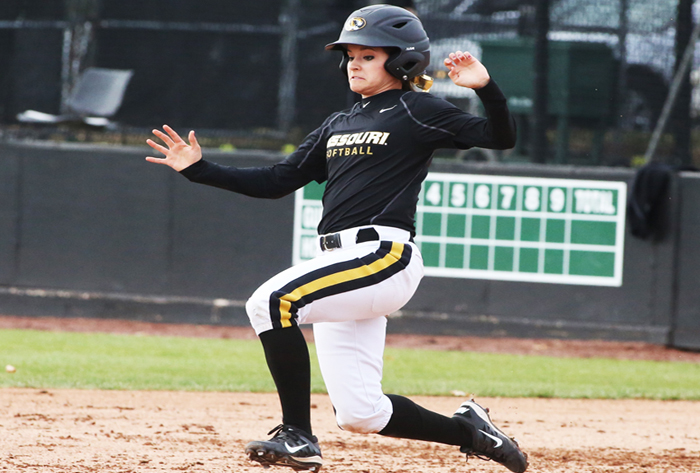 COLUMBIA, Mo. — In a rundown Bulgarian town, Raime Cohen eagerly waited inside what she called the “Kids’ House” for the promise of a new future.

An American couple pulled up to the orphanage where Cohen had lived since her biological parents gave her up shortly after birth. They were back after visiting six months earlier.

Cohen, 3, greeted them with a big smile and warm embrace. Days later, they all left together for a trip to the United States.

She is now on the Missouri softball team. Despite never being recruited by the program, she impressed coach Ehren Earleywine enough in a rare tryout to secure a spot on the squad.

She joins the Tigers, ranked No. 15 in the preseason USA Today poll, on a quest to win the program's first national championship.

'This girl is for you'

Alan Cohen and his then-wife, Lorraine, wanted to adopt a child from out of the country.

Not knowing where to begin, he contacted a friend, an attorney who specialized in international adoption. Alan Cohen became the first person to use a new program for Bulgaria.

Through the program, his attorney had access to videos of eligible children.

“This girl is for you,” he told Alan Cohen after watching just the first video.

The couple agreed and started the adoption process later that day.

“Cutest little thing you ever saw,” Alan Cohen said. “She had an amazing resemblance to my family. Her baby picture looked like my sister’s baby picture.”

Later that year, he and his wife traveled halfway across the world to Bulgaria, a nation in Eastern Europe. Their destination was an orphanage located a four-hour drive away from the capital city of Sofia.

During the trip, they passed parts of Bulgaria that were in shambles, Alan Cohen said. The buildings were outdated and crumbling. One block away from the orphanage, he caught a whiff of the worst smell — one you couldn't even imagine, he said.

The couple arrived at the orphanage, where about 30 children lived at any given time with a team of caretakers. It was a concrete bunker — the nicest building in the entire town, Alan Cohen said.

They got to see Raime Cohen for the first time. There was an instant connection.

Caretakers at the orphanage told Raime Cohen that Alan Cohen and his wife were her real parents who were coming back to see her and eventually take her home.

The couple flew back to St. Louis ready to adopt, but they were forced to wait through an arduous adoption process.

Six months later, they were back to take Raime Cohen home with them. When they arrived this time, she recognized them. Raime Cohen was all smiles.

“She put her hands out and said, ‘Let’s go,’” Alan Cohen said. “She couldn’t speak English, of course, but she was all ready to go.”

Their trip to the airport in Sofia was Raime Cohen’s first time in a car, she said.

“This is so cool,” Raime Cohen remembered. “I was never really outside of the 'Kids’ House.'”

“The first thing I wanted when they asked was chocolate and chicken,” she said. Her adoptive parents obliged.

From then on, they became Mom and Dad.

On playgrounds in St. Louis, her parents taught her how to run. There had never been much space for organized games while in the orphanage. Now, she could roam free.

By elementary school, she was playing baseball with the boys.

“She was always a super athlete,” Alan Cohen said. “She preferred team sports because she liked being with other girls and boys.”

Raime Cohen went on to play basketball, soccer and lacrosse. She eventually started playing tennis, but it wasn’t her favorite because she competed by herself. Her desire to be on a team stretches back to her time in the orphanage, she said.

During her teenage years, Raime Cohen switched her focus to softball. She played for Clayton High School and also was on a club team.

“I fell in love with the sport,” she said. “Throwing, hitting, the environment … I enjoyed everything about it.”

She dreamed of playing college softball, even at a Division II or III level.

“If I can compete with Division I pitchers, I can probably play at a college level,” she remembered thinking.

Raime Cohen's father and stepbrother both graduated from MU, and she wanted to follow in their footsteps. But the Tigers hadn't recruited her. A collegiate playing career might not be in the cards.

She looked at other schools, but none of them jived with her academic ambitions. She chose MU for its broadcast journalism program.

The summer before the fall semester of her freshman year, Raime Cohen reached out to Earleywine to request a tryout. She had to at least try, she said.

“We don’t do tryouts, but you can send me a video of yourself running,” Earleywine said at the time.

“Alright, I’ll do that,” Raime Cohen responded. She sent him a video of herself running.

The two got together the week before classes began. They clicked right away, Raime Cohen said.

Just like that, Earleywine offered her a roster spot.

“I want you to be a pinch runner,” he told her.

“He told me straight up, ‘This is what I’m looking for you to do,’” she said.

Taken by surprise but still thrilled by the opportunity, Raime Cohen accepted the offer.

“I’m thankful he gave me any kind of role,” she said. “I was expecting, ‘OK, you can be on the team, but I don’t know if you’re going to do anything.’”

In collegiate softball, a player can pinch run for any teammate for the duration of a game. Unlike baseball, a pinch runner can re-enter a game more than once, and the player she's pinch-running for can still bat and play defense. It gives the Tigers a speed advantage like the Kansas City Royals, Raime Cohen said.

“I’m actually not 100 percent sure how it works,” the freshman admitted. “I get confused with the rules. When coach tells me to come in and run, I’m like, ‘Alright, OK.’”

“Coach is really big into baserunning, so there are some practices that are specific for baserunning,” she said. “First to third. Working on sliding. Stuff like that.”

Raime Cohen said it’s surreal to be on a Southeastern Conference team. She knows her role in the Missouri program and intends to thrive in it. What starts as a pinch runner position might expand over time.

For now, she’s content just being on the team.

More than 16 years have passed since Raime Cohen’s final day in the orphanage. She said she often reflects on her experiences in Bulgaria.

Raime Cohen doesn’t go out of her way to share her background with Missouri teammates. Lots of them know part of the story but not “the ins and outs of it,” she said.

But those closest to her know how her time in Bulgaria shaped who she is today.

“I couldn’t be more proud or excited,” Alan Cohen said. “To watch my daughter play for the team I root for, my alma mater, that’s just too much. That’s more than I could ever ask for. She lights up my life.”

Raime Cohen said if she wasn't adopted then, she might not ever have been. Her orphanage had been on the verge of shutting down.

"I wouldn’t have been given all these opportunities in Bulgaria," Raime Cohen said. "My life is pretty privileged. I'm just thankful."

“I learned at an early age that I wasn’t the center of the universe,” Raime Cohen said. “I was lucky to be adopted.”