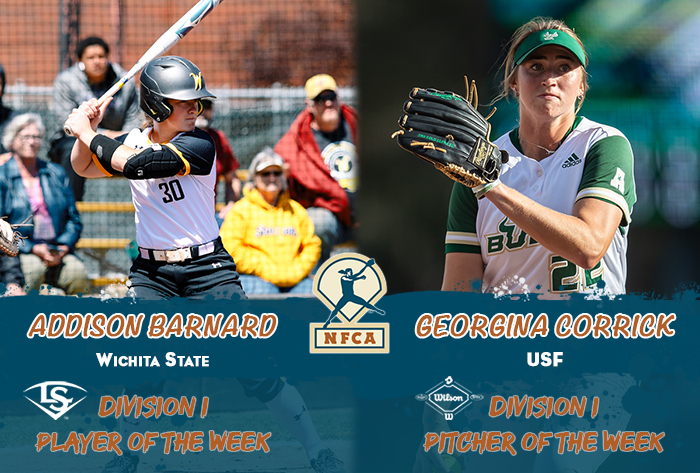 LOUISVILLE, Ky. – Wichita State’s Addison Barnard and USF’s Georgina Corrick were named Division I Louisville Slugger/NFCA Player and Wilson/NFCA Pitcher of the Week, respectively. The duo is being recognized for their outstanding play for the week of April 25-May 1.

This is the second straight and third overall nod for Barnard. The sophomore outfielder hit four more long balls last week and drove in eight runs against East Carolina. She matched a school record with a three-homer outing with seven RBI in game one of the series. Barnard hit .600 (6-for-10), scored six runs, slugged 2.000 and posted a .636 on-base percentage.

It marks the second honor for Corrick, who broke five records over the weekend. She posted a 3-0 mark against Houston with three shutouts, a perfect game, 26 strikeouts and held the Cougars to a .089 batting average. During the series, she set new single-season marks for American Athletics Conference (349) and USF (337) strikeouts, USF shutouts (16) and AAC wins (31). Additionally, with her perfect game in the series opener (11 K), Corrick is the first Bull to toss two perfectos in the same season. She also  became the first 30-game winner in NCAA DI.

The Division I Player & Pitcher of Week awards must be nominated by member head coaches and are voted on by the NFCA's Division I Top 25 Committee, which consists of one head coach representing each of the 32 NCAA DI Conferences.