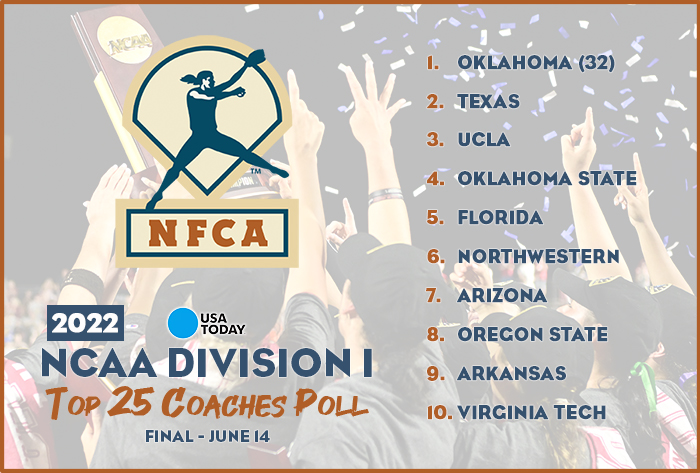 LOUISVILLE, Ky. – Back-to-back national champion Oklahoma went wire-to-wire as the No. 1 team in 2022 USA Today/NFCA Division I Top 25 Coaches Poll. The Sooners (59-3), who were the unanimous No. 1 in all but one poll this season, have been atop the rankings for 29 consecutive weeks.

OU capped off a record-breaking season with a dominant run through the postseason, which saw the Sooners post a 10-1 postseason record, including 5-1 at the Women’s College World Series. Capturing their fourth national title in the last six years and sixth overall (trailing just UCLA and Arizona), the Sooners knocked off Big 12 rival Texas in the Championship Series by the scores of 16-1 and 10-5. For the season, the Sooners registered 41 run-rule victories, 33 shutouts, eight no-hitters, homered in 56 of 62 games and held the opposition to one run or fewer 49 times.

No. 2 Texas made a remarkable run to its first-ever Championship Series, becoming the first unseeded team to accomplish this feat. The Longhorns (47-22-1) won four true road games to get to the WCWS and completed their best campaign to date with a 9-4 postseason record. Texas won the Seattle Regional with two wins over host Washington and then knocked off the No. 4 seed Arkansas in Fayetteville after dropping the first game of the Super Regional. At the WCWS, Texas battled back after dropping its second game to OU by winning three elimination games against unseeded Arizona and No. 7 seed Oklahoma State (twice) to reach the series.

National semifinalists UCLA and Oklahoma State come in at No. 3 and No. 4. The Bruins (51-10) were 8-2 in the postseason, including a perfect 5-0 through Regionals and Super Regionals to punch their seventh straight WCWS ticket. After falling to Texas, UCLA won three straight, including forcing a winner-take-all-semifinal against Oklahoma.

The Cowgirls (48-14) won their first seven games of the postseason, which included a sweep of the No. 10 seed Clemson in Super Regionals. OSU knocked off Arizona and Florida to reach the semifinals before falling to Texas twice.

The final four WCWS participants - No. 5 Florida, No. 6 Northwestern, No. 7 Arizona and No. 8 Oregon State - make up the next four spots in the rankings. The quartet all went on the road in Super Regionals to reach the WCWS.

The Gators (49-19) rallied past No. 3 seed Virginia Tech by outscoring the Hokies 19-2 in the final two games. Northwestern came out of a closely-contested Super Regional at Arizona State to reach its first WCWS since 2007.

Arizona and Oregon State joined Texas as unseeded programs at the WCWS. The Wildcats (39-22) entered the WCWS with a 5-0 postseason record, capturing the Columbia Regional with two victories over the host Tigers and sweeping Mississippi State in the Starkville Super Regional. The Beavers (39-22) came out of the Knoxville Regional, posting a 4-2 record, including two wins over the host Lady Vols on the final day to advance to Super Regionals where they swept Stanford in an all-Pac-12 Super Regional.

Arkansas (48-11) and Virginia Tech  (46-10) round out the top 10. With their Super Regional runs, the aforementioned Cardinal and Bulldogs finished inside the top 20 at No. 18 and No. 19, respectively. The duo went on the road and knocked off No. 6 seed Alabama and No. 2 seed Florida State, respectively.

The 2022 USA Today/NFCA Division I Top 25 Coaches Poll is voted on by 32 NCAA Division I head coaches with one representing each of the NCAA’s Division I Conferences. Records reflect games played through June 9.

The 2022 USA Today / NFCA Division I Top 25 Coaches Poll is voted on by 32 NCAA Division I head coaches with one representing each of the NCAA’s Division I Conferences. Records reflect games played through June 9, 2022.