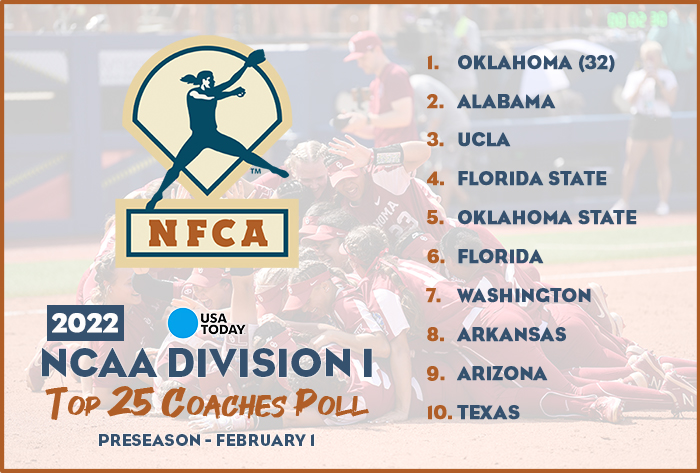 LOUISVILLE, Ky. – Defending national champion Oklahoma is the unanimous No. 1 team in the 2022 USA Today/NFCA Division I Top 25 Preseason Coaches Poll. Receiving all 32 first-place votes, the Sooners enter this year No. 1, a spot they held for the final 13 weeks of 2021.

The 2021 campaign was one for the record books. Capturing its fifth national title, the third in the last five years, OU (56-4) set multiple single-season NCAA records, including team batting average (.405), team slugging percentage (.778), on-base percentage (.490), home runs (161) and runs scored (638), among others. The Sooners navigated through the elimination bracket with four straight victories and then knocked off Florida State, two games to one in the Championship Series.

National semifinalist and Southeastern Conference (SEC) preseason favorites Alabama (52-9) followed at No. 2 with UCLA (47-7), national runner-up Florida State (49-13-1) and Oklahoma State (48-12) rounding out the top five. The Seminoles were voted to win the Atlantic Coast Conference (ACC), while the Cowgirls were selected second in the Big 12’s preseason poll.

Finalizing the preseason rankings are No. 16 Michigan (Big Ten), No. 23 Louisiana (Sun Belt), No. 24 Liberty (ASUN) and No. 25 Wichita State (American Athletic Conference). The latter two were voted their league’s 2022 favorites.

The 2022 USA Today/NFCA Division I Top 25 Coaches Poll is voted on by 32 NCAA Division I head coaches with one representing each of the NCAA’s Division I Conferences. The first poll of the regular season will be published on Feb. 15 at 10 a.m. ET.

The 2022 USA Today/NFCA Division I Top 25 Coaches Poll is voted on by 32 NCAA Division I head coaches with one representing each of the NCAA’s Division I Conferences.