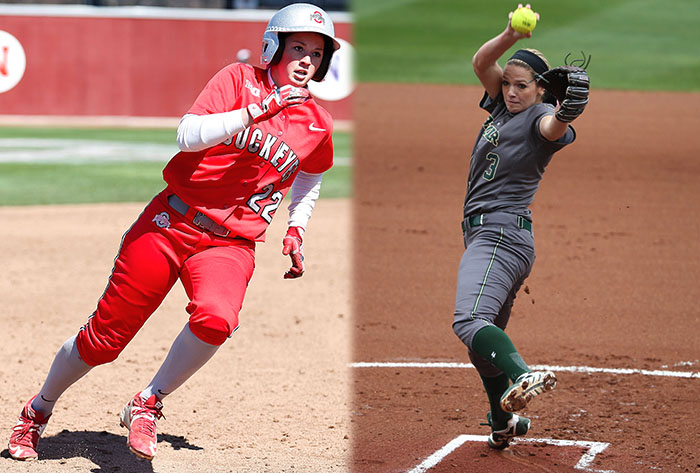 Swinging a red-hot bat, Prantl hit .786 and was retired just three times as she helped the Buckeyes (9-4) to a 4-1 showing USC Upstate’s Spartan Classic. She went 11-for-14 with three doubles, two home runs, nine RBI and eight runs. The senior from Ashville, Ohio slugged 1.429 and reached base at a .824 clip.

“I am extremely honored and humbled to be receiving this national award,” Prantl said. “This would not be possible without the support of my teammates and the coaching staff. Driving in runs is impossible without my teammates being on base. I want to especially thank coach [Jenna] Hall for the hundreds of hours we have spent together working on my swing and her unwavering support. Go Bucks!”

In a 15-3 victory over Furman, Prantl was 4-for-4 with a long ball, two doubles and three RBI. She followed up the next day by knocking in three and recording two more hits. In the nightcap, she homered, doubled and after being intentionally walked, scored what proved to be the game-winning run against Virginia Tech. Prantl added a 3-for-3 effort against the host Spartans and registered a pair of RBI in their first contest against the Hokies.

“Cammi has not only had a fantastic weekend but an entire career for the Buckeyes,” said head coach Kelly Kovach Schoenly. “She was determined to help our team be more clutch and she set that tone early and continued through the entire weekend. Cammi ignited our offense and it was contagious. We are thrilled for her to achieve this honor and appreciate that she was noticed for her accomplishments.”

Powered by a no-hitter, Stearns, a native of Plano Texas, was nearly untouchable and did not allow a run in her three appearances at the Mississippi Gulf Coast Classic last weekend. She got off to a tremendous start by no-hitting Southern Mississippi in the tournament opener. The senior righty struck out 11 and walked two in five innings. Sterns continued her dominance against Mississippi State, who is currently receiving votes in the USA Today/NFCA Division I Top 25 Coaches Poll. Her one-hit, nine-strikeout performance lifted the 24th-ranked Bears to a 4-0 triumph.

“This weekend was a great team effort and a big turnaround for us,” said Stearns. “Every aspect of our game was outstanding, from pitching to hitting to defense. It is extremely exciting to gain national attention for the Baylor softball program.”

She closed out the tournament striking out the final two batters to preserve a 1-0 win over Nicholls State and earn the save. For the week, she went 2-0, struck out 22, allowed just one hit and held her opposition to a .027 batting average.

“Heather is a tremendous competitor and a great leader,” head coach Glenn Moore said. “I’m very proud to see her hard work get recognized on a national level.”