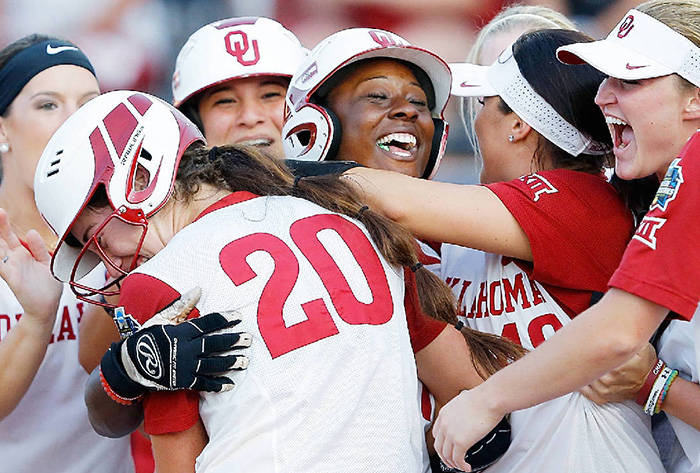 OKLAHOMA CITY – In another classic battle between Alabama and Oklahoma, Sooner freshman Shay Knighten hit a three-run walk-off home run with one out in the bottom of the eighth to lift OU to a 3-0 win over the Crimson Tide (51-13) in game three of the 2016 Women’s College World Series, Friday evening at ASA Hall of Fame Stadium. The contest picked up in the bottom of the second after it was halted due to inclement weather on Thursday night.

Oklahoma’s Paige Parker and Alabama’s Alexis Osorio were locked in a pitcher’s duel for seven-plus innings before the NFCA All-American Knighten broke through sending an eye level pitch opposite field over the rightfield fence. She finished 2-for-4 with three RBI and a runs scored.

Parker (34-3), a first-team NFCA All-American, allowed four hits, struck out seven and walked two. She was able to get out of a few sticky situations to secure her 14th shutout of the season.  The victory extended Sooners' (53-7) winning streak to 28 games.

Osorio (19-7) was solid in her outing, striking out ten and surrendering just three hits in 7. 1 innings of work.

The Tide had their chances throughout the contest, but could not get the big hit with runners in scoring position and finished the contest stranding seven. Two of those chances came in the third and fifth with less than two outs, but Parker, each time, would record out number two with a strikeout and then induce a foul out and fly out, respectfully to end the threats.

With the change to the schedule, both squads will be in action tomorrow. Alabama returns to action at 1:30 p.m. CT and will take on LSU, while Oklahoma will play Michigan at 8:30 p.m. CT.