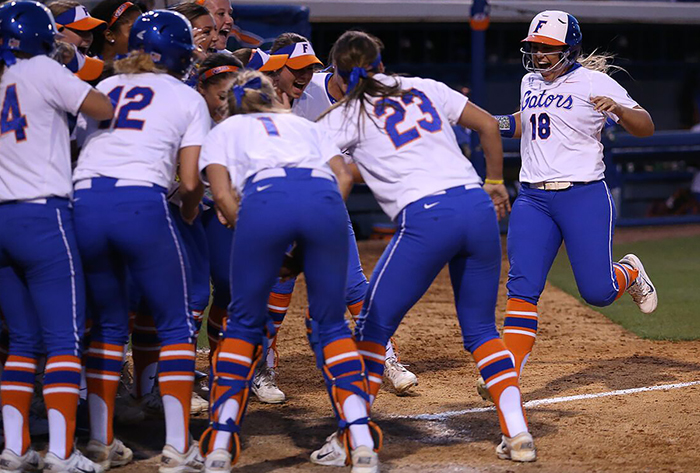 LOUISVILLE, Ky. –  Florida secured its second straight SEC regular-season championship and held steady at No. 1 in this week’s USA Today/NFCA Division I Top 25 Coaches Poll. A red-hot Oklahoma rose to No. 5 for its highest ranking of the season.

The Gators (52-4), receiving 31 first-place votes and 799 points, closed out the regular season with five wins to reach the 50-win plateau for the fourth straight season and eighth time overall. UF began the week with two victories over then-No. 5 Florida State, a 7-1 triumph and a 12-inning 1-0 victory in a continued game from April. Wrapping up SEC play, Florida, in the midst of sweeping Arkansas (9-0, 5-0, 8-0), clinched its six overall league regular-season title.

No. 3 Oregon and No. 4 Alabama both went 2-1 in conference play. After a sweep of Utah Valley, the Ducks (42-7) took games one (15-2) and three (5-2) at Cal, needing one more win next weekend against RV Utah to clinch their fourth straight outright Pac-12 regular-season title. The Crimson Tide (45-11) clinched their final SEC series, winning the first two games against No. 15 Georgia (7-2, 9-7) and securing fourth place for the league tournament.

The Sooners (45-7) cruised to a three-game sweep of Texas Tech to earn their fifth straight Big 12 regular-season championship and ninth overall; no other Big 12 program has won more than two consecutive. Along with a mid-week triumph at Tulsa, Oklahoma is riding a 20-game winning streak, matching the fourth longest in program history and the longest since a 24-game streak in 2007.

No. 7 James Madison (43-4) jumped up one as it closed out with two wins against Hofstra (4-0, 7-1) and will be the host and No. 1 seed for the CAA Tournament. Auburn fell two more spots to No. 8 after dropping two of three to then-No. 18 Texas A&M at home. The Tigers (46-9) finished third in the SEC regular season and earned a first-round bye for the tournament.

The USA Today/NFCA Division I Top 25 Poll is voted on by 32 NCAA Division I head coaches, one representing each conference. Records reflect games played through May 8, 2016.