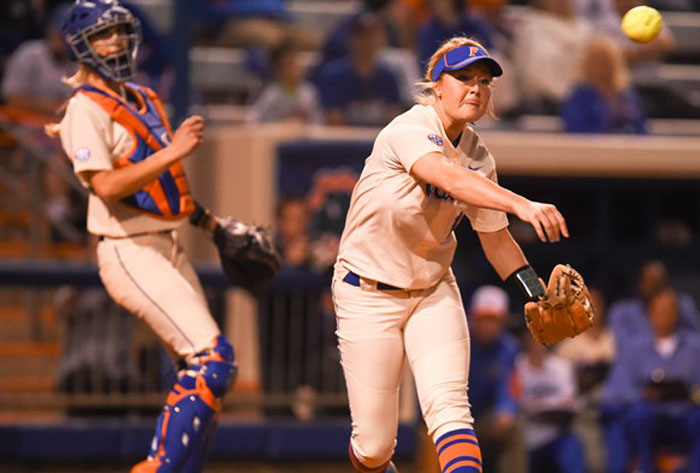 Behind a strong effort in the circle and timely hitting, the Gators (16-0) remained undefeated in 2016 by sweeping through five tough opponents in Cathedral City, Calif. last week. Facing strong competition, pitching was key as they won four of the five game by three runs or less. The staff recorded two shutouts against now-No. 23 Nebraska (8-0) and Utah (1-0) and allowed just a run in victories over then-No. 11 UCLA and then-No. 9 Washington. The Gators also defeated North Carolina State, 5-2.

The Crimson Tide, playing at home for the first time, moved to 15-1 with a perfect 5-0 week. Following a mid-week 8-0 home-opening win over Troy, Alabama needed a little late-inning magic to stay undefeated during its annual Easton Bama Bash. The Tide recorded walk-off wins against No. 15 Arizona (4-3), Marshall (4-2) and then-No. 14 Tennessee (6-5), which included erasing seventh-inning deficits against the Wildcats and Vols. Also of note, the win over Arizona was the first in Tuscaloosa in program history. They would go on to defeat the Wildcats (9-1) again the following day.

LSU racked up five home wins over South Alabama, Illinois State (twice) and Texas Tech (twice). The Tigers (13-2) blanked the Jaguars, run-ruled the Redbirds and edged out the Red Raiders 3-2 in eight innings and 5-3.

Louisiana-Lafayette put together six home wins, the final four via run-rule and shutout, improving to 14-1 and remaining in the six spot. Oregon (12-4) stays at No. 7 after earning four wins at the Mary Nutter, including then-No. 17 Missouri and then-No. 20 Fresno State at the Mary Nutter. The Ducks lone loss was a walk-off defeat to No. 23 Nebraska.

Washington and Georgia flipped flopped positions. The Huskies (12-3) are eighth after a 3-2 showing at the Mary Nutter. They picked up significant wins over Nebraska in extra innings (6-5) and No. 2 Michigan (6-5), on a walk-off sacrifice fly and were edged out by No. 1 Florida (3-1).

Georgia fell a spot to No. 9, dropping one game at the Mary Nutter to then-No. 11 UCLA (6-14). The Bulldogs did defeat LIU Brooklyn, Cal State Fullerton, Northwestern and San Jose State.

Texas A&M continued its rise, moving up five more positions to No. 11. Nebraska (10-3) and previously-ranked Baylor (11-3) joined the rankings at 23rd and 24th respectively, while Texas and California dropped out.

The USA Today/NFCA Division I Top 25 Poll is voted on by 32 NCAA Division I head coaches, one representing each conference. Records reflect games played through Feb. 28, 2016.