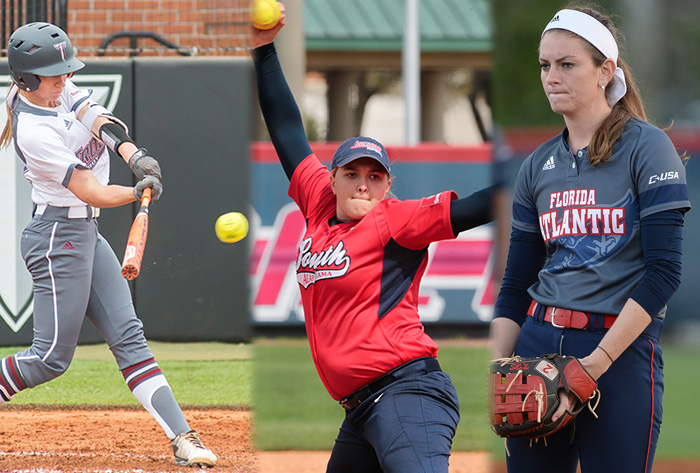 Day, a native of Crestview, Fla., had a weekend to remember that attributed to her .812 (13-for-16) batting average, six home runs, 20 RBI, 12 runs and 2.125 slugging percentage over four games last week. In Troy’s three-game Sun Belt series at Appalachian State, she hit .857 (12-for-14) with three doubles, all six long balls, 19 RBI and 11 runs scored. The senior rightfielder reached base safely in her first 10 plate appearances and posted four-plus RBI in all three contests.

“I’m very honored to have received this recognition,” Day said. However, this would not have been possible without our coaches and each of my teammates doing their job. Our coaches prepared us with a game plan and we bought in and in the end it paid off."

Following a 3-for-3, four-RBI outing in the opener, Day was 5-for-5, clubbing three home runs, registering two doubles, knocking in program-record nine runs and scoring five times. Her 16 total bases matched an NCAA single-game mark and her three dingers tied a school record. Day closed out her monstrous weekend, going 4-for-6 with a double, two more homers, six RBI and four runs scored.

“Hannah is one of those special players and competitors,” said head coach Beth Mullins. “She has worked hard to help her teammates and this program be successful. It is a huge honor for her and Troy softball that she has been recognized with this award.”

Highlighted by a perfect game, Brown went 3-0 with a 0.00 ERA and 28 strikeouts in 17 innings for the Jaguars last week. The senior righty struck out 11 of 15 batters against Louisiana-Monroe to become the second Jaguar to toss a perfect game.

"This is a really big honor for our team,” said Brown. “We played really well together last week, and we took a big step forward. This is a big moment for me, and I'm very happy about it."

Brown, a sophomore from Mobile, Ala., preceded the perfecto with a one-hit shutout of the Warhawks, striking out seven and walking one in five innings. She also twirled a four-hit complete game against Southern Miss in which she struck out 10 and surrendered an unearned run in a 5-1 non-conference victory. For the week, she allowed five hits and held opponents to a .089 batting average.

"I'm really proud of Devin and her progression,” head coach Becky Clark said. “Last week, she was really efficient, which is one of the things we've been emphasizing in the bullpen. It was a great week for her, and I'm happy to see the work she's been putting in pay off for her and her teammates."

Hanson twirled three two-hit shutouts and struck out 23 in helping Florida Atlantic to three of its five wins and catapult them into the No. 23 ranking in this week’s USA Today/NFCA DI Top 25 Coaches Poll. It’s the program’s first ranking since 2004 and also the Owls’ first 3-0 conference start since 2008.

“It's an honor,” said Hanson. “There has been a lot of hard work and preparation that the team has put into this season. It feels like everything is coming together."

The junior from Jupiter, Fla. opened the week with an eight-inning gem against RV UCF. Hanson struck out a week-high nine batters. In a pair of shutouts at Conference USA foe Middle Tennessee, the right-handed hurler struck out six in the opener and closed out the series with eight. In the finale, the Conference USA Preseason Pitcher of the Year did not allow a runner into scoring position.

"We expected big things out of Kylee this season and she has lived up to those expectations,” said NFCA Hall of Famer and FAU head coach Joan Joyce. “This award is nice because it means that her hard work is being recognized."