Day 1 of NFCA DII Leadoff kicks off in Clearwater 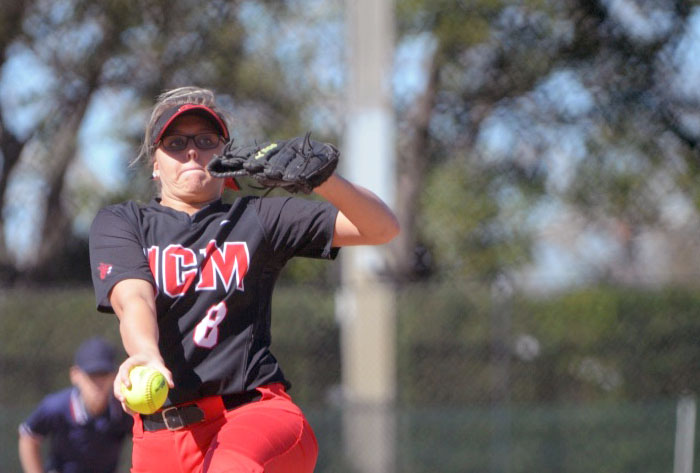 Clearwater, Fla. – In near perfect conditions, the 2017 NFCA Division II Leadoff Classic kicked off with 15 games of competitive softball on a beautiful Friday at the Eddie C. Moore Complex.

Four squads- No. 24 California (Pa.), No. 17 Saint Leo, Texas A&M University-Commerce and West Chester- each posted two wins, while Florida Tech picked up a win in its only Friday contest. The Vulcans (2-0) and Texas A&M-Commerce (6-1) used strong pitching in their victories, each tossing a shutout and allowing a combined three runs. On the flip side, West Chester (2-0) and Saint Leo (7-1) used offense- a combined 31 runs- and comebacks in their respective triumphs.

The Rams scored a Friday-best 11 runs in a season-opening 11-5 victory over Tiffin and used a four-run seventh-inning rally to top Rollins 6-4. In a back-and-forth contest, Saint Leo scored the final three runs to edge Central Missouri, 7-5 and then jumped out to a 5-0 lead against Georgia College and finished the Bobcats off, 7-1.

Kaity Davis and Taylor Robblee combined on a five-hit shutout as the Vulcans (2-0) blanked Hillsdale, 3-0 in their season opener. They were one-out shy of a second shutout in the nightcap, defeating Trevecca Nazarene, 7-1. Following Texas A&M Commerce’s 6-2 victory over Hillsdale, the Lions received a timely two-run sixth-inning single from December Rivers in a four-hit shutout victory (2-0) Catawba.

Also, earning wins on day one were No. 10 Wayne State (Mich.), No. 13 Valdosta State, Eckerd, Central Missouri and Rollins. The Warriors (1-1) and Blazers tossed shutouts. The Tritons (3-5) bounced back from a one-run loss to the Jennies (4-4) with a 9-4 victory against Trevecca Nazarene. The Tars (4-3) edged Tiffin in their tournament opener.

Day two gets started at 10 a.m. and will feature all 16 teams playing two contests apiece.