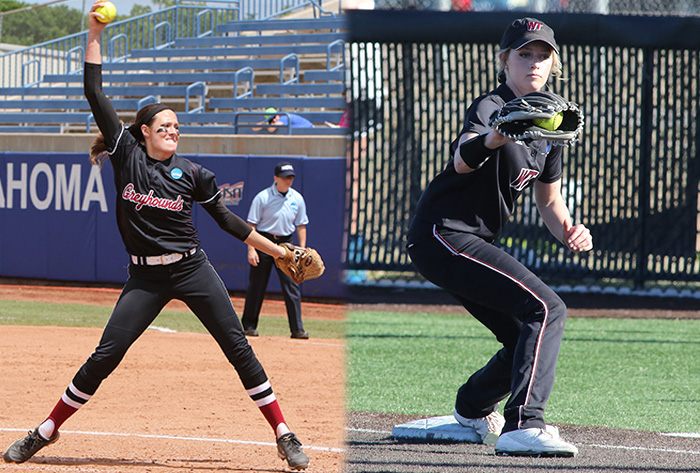 Foley had a spectacular weekend at the Music City Invitational to garner her first pitcher of the week nod and second overall (4/22/15). Foley set a new Division II benchmark by striking out the maximum 21 batters over seven innings in a no-hit performance against Hillsdale. It broke the previous mark of 20 held by Dori Stankewitz (Florida Southern, 1987) and Hannah Perryman (UMSL, 2014). The righty from Louisville, Ky., joins Cal All-American and U.S. Olympian Michele Granger and Jennifer Martinez of Division III St. Joseph's College (L.I.) as the only pitchers in NCAA history to strike out 21 batters in a seven-inning game (Martinez did it twice).

"Getting four good team wins was great for our team and being able to personally accomplish a goal I have always strived for was a bonus,” said Foley. “(Catcher) Jenny Thompson did an amazing job behind the plate, and the positivity and reassurance my team gave me throughout the game gave me the confidence to pitch how I did."

In addition to Foley’s 21-strikeout performance, she struck out 33 in her other three appearances for a staggering total of 54 punchouts in just 24.1 innings of work. Along with her no-hitter, Foley picked up a win against Huntington in which she struck out 13 and surrendered two hits over 5.2 innings. She also struck out 10 against Trevecca Nazarene (4.2 IP) and Ohio Dominican (7 IP).

"What a great accomplishment for Morgan,” head coach Melissa Frost said. “I am thrilled to see Morgan's performance make such a huge mark in a record books! She represents our program in an exemplary manner, both on and off the field. She has worked hard in the off-season, and I am excited to see what the rest of the season holds for her and pour team."

Starkey hit .667 (6-for-9) with three doubles, two triples, six RBI and seven runs helping the top-ranked Lady Buffs to a Lone Star Conference sweep of then-No. 20 Tarleton State. The rookie first baseman drew five walks for a .786 on base percentage and slugged 1.222 in the four-game series.

“This is such an honor, being listed alongside the great players in WT Softball history that have earned this award is special,” said Starkey “I couldn’t have done it without my teammates, there are a handful of players in our lineup that could have been in this same position. It is great to be a part of such a talented team where a different person steps up an does something amazing every time we step on the field.“

A native of Denton, Texas, Starkey was the catalyst in the opener, going 2-for-3 with a double, triple and three runs scored. In the final two contests, she was a perfect 4-for-4 with two doubles, six RBI and three runs. In game three, she knocked in four and scored three times and capped off the weekend with a double and two RBI.

“This is a great honor for Shayne, she had a great weekend and has been outstanding through 20 game,” said head coach Kevin Blaskowski. “It also serves as a testament to the quality of our freshman class and how they are contributing to this point. Shayne is one of the three who are not only in the top third of our stat sheet but the conference stats as well.”

Selected Top Performances
University of Colorado at Colorado Springs’ Melissa Martinek was selected RMAC Player of the Week after hitting .667 (8-12) with four home runs, six RBI, seven runs scored, a 1.750 slugging percentage, .750 OBP and a perfect fielding percentage (15-15) at shortstop… Courtney Poole of North Georgia went 5-0 with a 0.47 ERA and 44 strikeouts in 30 innings of work to earn Peach Belt Pitcher of the Week plaudits… Mountain East Player of the Week, Erika McLaughlin of UVA Wise hit .727 with four extra-base hits, four runs scored, seven RBI and was a perfect 18-for-18 in the field at shortstop… Wayne State’s Lyndsay Butler went 3-0 with a 0.33 ERA, struck out 25 and held opponents to a .139 batting average, while hitting .533 herself with a long ball and three RBI to garner GLIAC Pitcher of the Week honors… GLIAC Player of the Week, Carly Banchiu of Lake Superior State hit .636 (7-11) with two home runs, seven RBI and seven runs scored… PacWest Pitcher of the Week, Aryn Feickert of Dixie State collected three wins, posted a 1.00 ERA with 20 strikeouts in 14 innings of work… Anderson’s Augie Pena struck out 21, did not allow an earned run to pick up two victories and SAC Pitcher of the Week recognition… West Chester’s Alyssa Herion hit .562 (9-16) with a double, two long ball five run scored and six RBI over the weekend… Indianapolis’ Natalie Lalich took home GLVC Player of the Week recognition after hitting .538 with four home runs, seven RBI and a 1.462 slugging percentage… Northwest Missouri State’s Sarah Baldwin tossed a two-hit 12-strikeout shutout to earn MIAA Pitcher of the Week honors… Delta State’s Morgan Kazerooni was named Gulf South Player and Freshman of the Week after hitting .667 (6-9) with two doubles, two homers, six RBI and three runs scored in a league series against Lee… Gulf South Pitcher of the Week, West Florida’s Kalyn Chapman went 2-0 with a save, struck out 25 and posted a 0.42 ERA helping her squad to a three-game sweep of No. 18 Valdosta State… Missouri Western’s Katie Klosterman hit .636 with three home runs, four RBI, five runs scored and a 1.636 slugging percentage to garner MIAA Hitter of the Week accolades… CCAA Pitcher of the Week, Chico State’s Brooke Langeloh went 2-0, allowed an earned run, struck out 12 and held No. 17 UC San Diego to a .122 batting average over 14 innings of work.