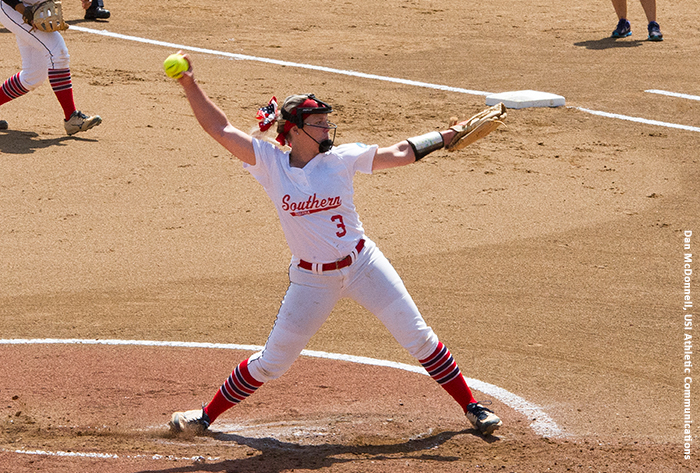 SALEM, Va. - A wild nightcap capped off day two of the NCAA Division Softball Championships at the Moyer Sports Complex. After Southern Arkansas' 12-11 win over Chico State in the second eliminatino game, six teams remain in the hunt for a national championship.

Along with the highest scoring and longest affair of the tournament, the day featured a no-hitter and another walk-off win.

The day started off with a bang as No. 8 Southern Indiana’s Jennifer Leonhardt continued her masterful pitching, no-hitting No. 4 Angelo State in the first winner's bracket game of the day. Dubbed the “cardiac kids,” No. 2 Saint Anselm walked off again when Shannon Colson’s perfect squeeze bunt capped off a two-run seventh, lifting the Hawks to a 4-3 win over No. 6 Saint Leo.

After North Georgia blanked West Chester in the first elimination contest, the Lady Muleriders held off a furious seventh-inning rally and stayed alive in the three-plus hour contest.

The Screaming Eagles and Hawks move on to Saturday's winner's bracket games, while the Rambelles and Lions fell to the elimination brackets. West Chester's and Chico State's tremendous seasons came to end.

With the impending inclement weather moving in on Saturday, two elimination games will be played at 8:30 a.m. followed by two more contests at 10:30 a.m. Saint Leo versus North Georgia and Angelo State versus Southern Arkansas open up Saturday morning with the winners playing Southern Indiana and Saint Anselm, respectively at 10:30 a.m.

The Screaming Eagles move on to Saturday's winner's bracket game on Saturday at 4 p.m, while the Rambelles drop to the elimination bracket and will face the winner of West Chester and North Georgia tomorrow at 11 a.m.

Southern Indiana’s Jennifer Leonhardt was nearly perfect in a 3-0 win against Angelo State as her dominance continued through the first two games of the NCAA Championships.

The sophomore righty retired the final 16 batters she faced, striking out 10 and allowing just one base runner on a two-out second-inning walk. Leonhardt (23-12) has allowed just one hit and four base runners, while fanning 21 and walking three through 14 innings of work.

The Screaming Eagles (38-23) scored all three of their runs with two outs in the bottom of the fifth. An error to start the inning and a two-out walk opened the door for USI. After Leonhardt loaded the bases with a two-out single, Caitlyn Bradley singled down the rightfield line to break the scoreless deadlock. Allison Schubert then singled to center to add the third run.

Brandy Marlett suffered the defeat without allowing an earned run. She scattered five hits, struck out six and walked one in 5.2 innings of work.

For the second straight game, Saint Anselm walked-off with a win. Colson dropped down a perfect squeeze bunt to cap off a two-run seventh and lift the Hawks to a 4-3 victory over Saint Leo.

Trailing 3-2 in the seventh, Megan Murrell rocketed a one-out RBI single to left to even the game at 3-3. Colson stepped up and put down a bunt that allowed Maggie Murphy to slide home head first with the winning run.

The Hawks grabbed a 2-0 lead in the second. Shannon McLaughlin drew a bases loaded walk and Amanda Bickford knocked in the second run with a infield single to short.

Saint Leo rallied for three runs in the fifth to grab a 3-2 lead. A one-out RBI single by Shyanne Dubois put the Lions on the board. An error by the catcher allowed the Ashley Morris to scoot home with the tying run. Bethany Kursch’s RBI groundout to short gave Saint Leo the advantage.

A four-run second propelled North Georgia to a 4-0 win over No. 5 West Chester (45-15) in the first elimination game of day two.

An RBI single by Alishia Frierson opened the scoring for the NightHawks (62-3). Jordan Deep doubled down the rightfield line to make it 2-0 and Brittany Gilliam cracked a two-run double to left center to cap off the four-run inning.

Kylee Smith went the first sixth innings and picked up the win. She struck out five, allowed three hits and walked one to improve to 36-2 on the season. Amber Johns closed out the contest with a scoreless seventh.

No. 7 Southern Arkansas held on for a 12-11 win over No. 3 Chico State in the second elimination game of day two.  This wild affair saw five four-run half innings and it was easily the highest scoring contest of the first two day. The highest run total for one team prior to the nightcap was four runs, twice.

The Lady Muleriders (58-10) carried a 12-7 lead into the bottom of the seventh courtesy of a Megan Godoyo grand slam. The granny was needed as the Wildcats staged a crazy rally to get within one and have the tying a winning run on base.

After a one-out solo home run by Bailey Akins, Chico State benefited from three consecutive SAU miscues to get within one. After the succession of errors scored one run, Ari Marsh dropped in a two-run double to left center cutting it to 12-11. A single by Cyrena Taylor put runners on the corners with one out. However, a ground out and pop up ended the rally.

Godoyo finished 1-for-4 with five RBI and two runs scored. Brooke Goad was 1-for-3 with two walks, a RBI and three runs scored, while Faith Otts and Sarah Pitre each registered two hits. Otts drove in two and Pitre scored twice.