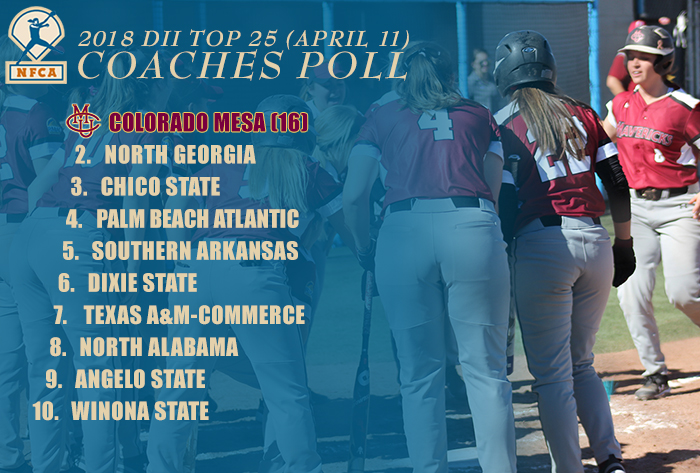 LOUISVILLE, Ky. – Colorado Mesa is the unanimous No. 1 team in this week’s NFCA Division II Top 25 Coaches Poll. The undefeated Mavericks (34-0), who earned all 16 first-place votes for the first time this season, enter their sixth straight week atop the poll.

CMU was idle last week as its contests at Black Hills State were snowed out. The Mavericks return to action this week hosting third-place Regis in a four-game Rocky Mountain Athletic Conference series.

There was no movement in the top five. No. 2 North Georgia went 3-1 suffering its first Peach Belt defeat of the season against Young Harris. No. 3 Chico State was idle. The Wildcats (35-3) return to action with a pivotal California Collegiate Athletic Association series against No. 18 Sonoma State.

Dixie State and Texas A&M University-Commerce flipped-flopped the No. 6 and 7 rankings. The Trailblazers (32-4) won six road games, while the Lions (32-4) split their Lone-Star Conference doubleheader with No. 13 West Texas A&M. Dixie State will face off against No. 13 California Baptist this weekend in a battle for first place in the PacWest Conference.

North Alabama (34-4) stayed at No. 8, while Angelo State moved up to No. 9 and Winona State dropped to No. 10. All three programs were undefeated on the week.

Continuing to climb in the polls is No. 12 Grand Valley State. The Lakers (23-5) have won 15 straight heading into this week. GVSU will be busy, playing five Great Lakes Intercollegiate Athletic Conference twinbills over seven days.

The 2018 NFCA Division II Top 25 Poll is voted on by 16 NCAA Division II head coaches with two representing each of the eight NCAA regions. Records reflect games played through April 8, 2018.