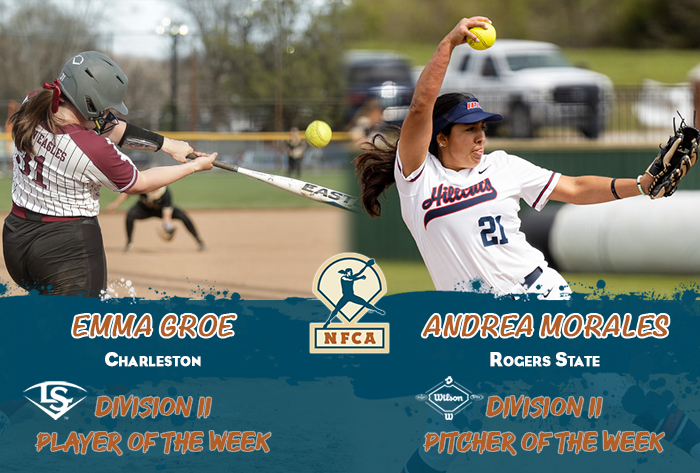 LOUISVILLE, Ky. –Charleston’s Emma Groe and Rogers State’s Andrea Morales were named NFCA’s Division II Louisville Slugger Player and Wilson Pitcher of the Week. The duo is being recognized for outstanding performances during contests played April 25-May 1, marking the final weekly awards of the 2022 season.

Groe slugged her way to the honor, hitting .643 with two doubles and three home runs last week. She posted a 1.429 slugging percentage and a 2.072 OPS. Groe registered at least one hit and scored one run in all four contests. She finished with five RBI on the week.

Morales was lights out last week, going 3-0, while tossing a perfect game and no-hitter in consecutive starts. This was accompanied by five innings of one-hit shutout relief with 10 strikeouts. In the perfect game, Morales shut down Fort Hays State with 14 strikeouts and followed that with a no-no versus Nebraska-Kearney with 15 punchouts. On the week, she fanned 39, walked one and surrendered one hit in 19 innings of work.