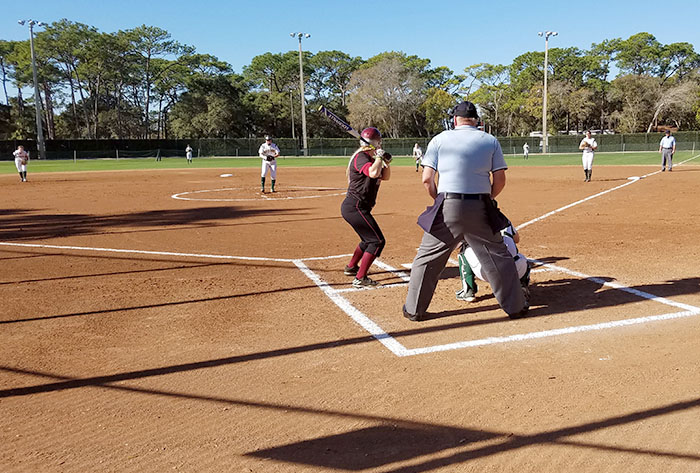 Clearwater, Fla. – Another beautiful day at the Eddie C. Moore Complex was greeted with some tremendous softball at the NFCA Division II Leadoff Classic. Highlighting the day were two walk-off finishes, a total of six one-run contests and a highlight-reel home run saving catch.

Eckerd, one of five programs to earn two victories on Saturday, played a pair of nailbiters and completed the perfect day in walk-off fashion against No. 24 California (Pa.). The Tritons sent it to extras with a run in the bottom of the seventh and Amber Schaad won the game with a single up the middle an inning later for a 4-3 win, which was preceded by a 2-1 triumph over Georgia College.

Earlier in the day, Hillsdale earned it first win of 2017 with a two-out seventh-inning rally against Catawba. After the Indians pushed two across in the top of the seventh, the Chargers loaded the bases with two outs, aided by an error on game-ending strikeout. Bekah Kastning took advantage of the extra out by lacing a walk-off bases clearing triple to right center for the 3-2 win. The momentum continued for Hillsdale as it picked up a 9-1 win over Trevecca Nazarene.

Also posting two victories were Florida Tech, No. 13 Valdosta State and No. 12 St. Mary’s. The Panthers joined the one-run win club when they edged Central Missouri, 3-2 after knocking off No. 10 Wayne State (Mich.) to improve to 3-0 at the Classic. The Blazers and Rattlers also pushed their records to 3-1.

There have be a lot of great defensive plays over the two days, including Saint Leo leftfielder Alyssa Wash’s home run saving catch against Tiffin. Wash tracked down a rocket off the bat of April Bennett and at full extension snagged the ball and held on as she crashed into the fence, robbing Bennett of a long ball

The final day of the Leadoff starts tomorrow morning at 9:00 a.m. and will feature nine games, including a top-25 matchup between No. 12 St. Mary’s and No. 17 Saint Leo.