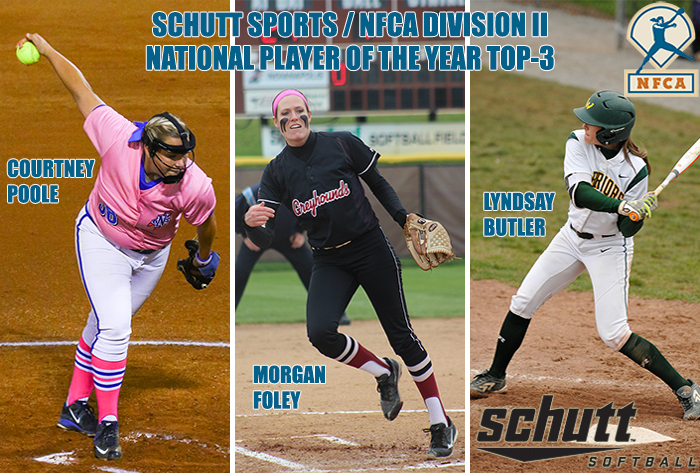 LOUISVILLE, Ky. – Seniors Courtney Poole of North Georgia and Morgan Foley of Indianapolis, along with junior Lyndsay Butler of Wayne State University were named the Top-3 finalists for the 2016 Schutt Sports/NFCA Division II National Player of the Year award, announced the Association on Thursday morning.

Poole, the award’s inaugural winner in 2015, is joined by first-time finalist in Foley and Butler. The 2016 Schutt Sports NFCA Division II National Player of the Year will be revealed on Tuesday, May 17.

Poole, who helped North Georgia to a 2015 National Championship, has continued her dominance in 2016. The right-handed hurler has won a NCAA Division II-record 53 games, a mark that was set last weekend with triumph No. 51 in a 1-0 shutout of Catawba. Poole is 53-2 with a 0.61 ERA, 24 shutouts and 435 strikeouts to just 47 walks in 364.2 innings of work. She has held her opponents to a .157 batting average and completed 45 of the 54 games started. Entering the week, the Watkinsville, Ga. is second in the NCAA in ERA and shutouts, along with ranking fourth in strikeouts. Poole’s squad is one win away from advancing to their second straight Division II National Championships.

Foley, the Great Lakes Valley Pitcher of the Year, has concluded a dominant collegiate career in the circle for the Greyhounds, amassing a program-record 140 wins and 1,659 strikeouts. She owns two NCAA (all divisions) single-game strikeout records- 30 (13 inn.) in 2014 and 21 in a seven-inning game this year. The Louisville, Ky. native finished second all-time in career Ks by a Division II pitcher and is a four-time first-team NFCA Midwest Region selection. Recently signing a professional contract with the Chicago Bandits of the NPF, Foley put forth a tremendous senior campaign. She finished 40-4 with a 0.85 ERA, 497 strikeouts and a .155 opponent’s batting average against in 272 innings. She currently leads Division II at 12.8 strikeouts per seven innings, is second in strikeouts and seventh in ERA.