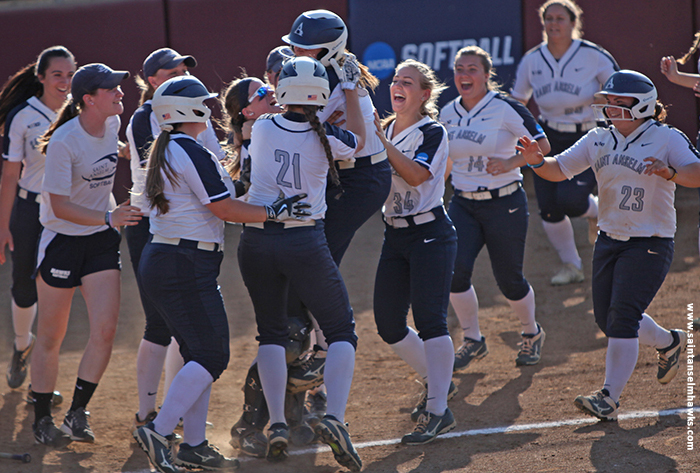 SALEM, Va. -- Runs were at a premium on the first day of the 2018 NCAA Division II Championships at the Moyer Sports Complex. In four one-run affairs, No. 2 Saint Anselm, No. 4 Angelo State, No. 6 Saint Leo and No. 8 Southern Indiana came out victorious.

Saint Anselm (pictured inside) was hitless until the sixth, but tied the game on an Erin Thompson home run and then earned the 2-1 walk-off win over No. 7 Southern Arkansas in the ninth. The final game of the evening was the highest scoring affair as Saint Leo edged No. 3 Chico State, 3-2.

In the winner’s bracket, USI will meet Angelo State at 11 a.m., followed by Saint Anselm and Saint Leo. A pair of elimination gamesl follow as North Georgia takes on West Chester and Southern Arkansas battles with Chico State.

Runs and hits were at a premium in the opener as USI's Leonhardt and North Georgia’s Kylee Smith went toe-to-toe in a classic pitcher’s duel. Leonhardt came out the victor as the Screaming Eagles (37-23) stunned the top-seeded Nighthawks (61-3), 1-0.

Leonhardt (22-12) tossed a one-hitter and drove in the game's only run. She allowed just three base runners and struck out 11 as she stifled the UNG lineup all game. At one point, she fanned seven straight, striking out the side in the second and third innings.

Smith (35-2), a back-to-back NFCA First-Team All-American, was equally as good. The sophomore hurler surrendered a run on three hits with six strikeouts and one walk.

After both teams reached base for the first time in the fifth, the lone run of the contest finally came in the top of the sixth. With one out and the bases loaded, Leonhardt smacked a RBI single through the left side for the game-winner.

The second straight pitcher’s duel of day one saw Marlett (25-3) strike out seven and retire the final 18 batters of the game in a masterful one-hit performance. Miscommunication on a shallow fly ball was the only baserunner she allowed in the top of the second. That runner was quickly erased on a pickoff by NFCA Third-Team All-America catcher Taegan Kirk.

Angelo State scratched across the game’s lone run in the bottom of the fifth. Brooke Mangold drove a one-out RBI single up the middle to plate Danae Bina from second with the game-winning run.

Houck (31-6) scattered six hits, struck out five and walked one in six innings.

Taylor Fogle and Karina Rocha each had two hits for the Rambelles.

Saint Anselm rallied from being no-hit through five innings and pulled off a 2-1 walk-off win in nine innings over Southern Arkansas.

Entering the sixth inning down a run and hitless, Thompson stepped up and sent the ball over the rightfield fence to knot the game at 1-1. With two outs in the bottom of the ninth and runners on first and second, Madison Borrelli put the ball in play. It was misplayed by the shortstop and leftfielder, allowing O’Connor to scoot home with the winning run.

Morgan Perry (24-4) collected the complete game win for the Hawks (42-10-1). She held a potent Mulerider offense, which was averaging almost two homers per game, to a run on six hits with six strikeouts and five walks.

Despite recording four hits in the fourth, Southern Arkansas (57-10) pushed just one run across on a RBI single by Monica Isalva.

Saint Leo’s Auria Mounts and Alison Mitts held Chico State to four hits and fifth-inning RBI singles by Kacie Kelly and Ashley Morris broke a 1-1 tie as the Lions (38-16) edged the Wildcats (55-5), 3-2 in the final day of game one. The five runs matched the total of the first three games combined scores.

Mitts picked up the win with four innings of two-hit relief. She allowed a run, struck out four and walked one to improve to 14-8 on the season. Mounts went the first three innings and allowed a run on two hits with four strikeouts, but issued six walks.

With the scored knotted at one-apiece in the top of the fifth, back-to-back run-scoring singles by Kelly and Morris gave the Lions a 3-1 advantage.

A solo home run by Cyrena Taylor cut the lead to 3-2 with one out in the bottom half of the fifth. The Wildcats threatened in the sixth, but with a runner on third, Mitts induced a popup and a lineout to end the frame. She sat Chico State down 1-2-3 in the seventh, highlighted by a game-ending diving catch by leftfielder Shyanne DuBois.

NFCA Second-Team All-American Haley Gilham (31-4) went the distance in the defeat. She scattered six hits, struck out seven and walked one.