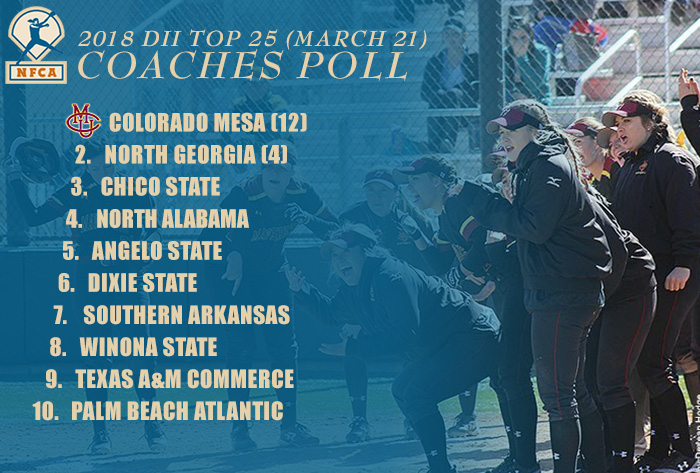 LOUISVILLE, Ky. – Colorado Mesa ran its undefeated start to 26 games and enters a third straight week at No. 1 in this week’s NFCA Division II Top 25 Coaches Poll. No. 9 Texas A&M University-Commerce and No. 10 Palm Beach Atlantic continue to rise up the ranks, entering the top 10 for the first time in their respective program’s histories.

The Lions (25-3) and Sailfish (19-2) are two of the hotter teams in the country. A&M-Commerce rolled through a Lone Star Conference series against UT Permian Basin to cap off a 7-0 week. The Lions scored 10-plus runs in every contest and defeated their opponents by a combined 82-12 margin. PBA swept a Sunshine State Conference series from Lynn to extend its winning streak to 14 games and improve to 12-0 in the league.

No. 3 through No. 8 shifted around as Chico State and North Alabama moved up two spots each to third and fourth, respectively. The Wildcats (26-3) took three of four on the road from California Collegiate Athletic Association foe and No. 22 UC San Diego. The Lions (23-2) improved their winning streak to 21 games after sweeping a three-game Gulf South Conference series at Montevallo.

No. 5 Angelo State and No. 6 Dixie State fell one and three positions, respectively. The Rambelles (27-3) put forth a 3-2 mark on the road against St. Mary’s and No. 15 West Texas A&M. The Trailblazers (22-2) dropped their first two games of the season, going 4-2 on a PacWest Conference trip to the Aloha State.

No. 7 Southern Arkansas and No. 8 Winona State switch spots for the second straight week as the Lady Muleriders (21-3) posted a 6-0 mark at home, while the Warriors were 4-1 at Emporia State’s tournament.

Valdosta State returns at No. 24, following a one-week absence from the poll and Tarleton State grabbed the 25th spot, its first ranking of 2018.

The 2018 NFCA Division II Top 25 Poll is voted on by 16 NCAA Division II head coaches with two representing each of the eight NCAA regions. Records reflect games played through March 18, 2018.

*based on teams with five-plus games played

Dropped Out: No. 17 Concordia Irvine, No. 24 Merrimack