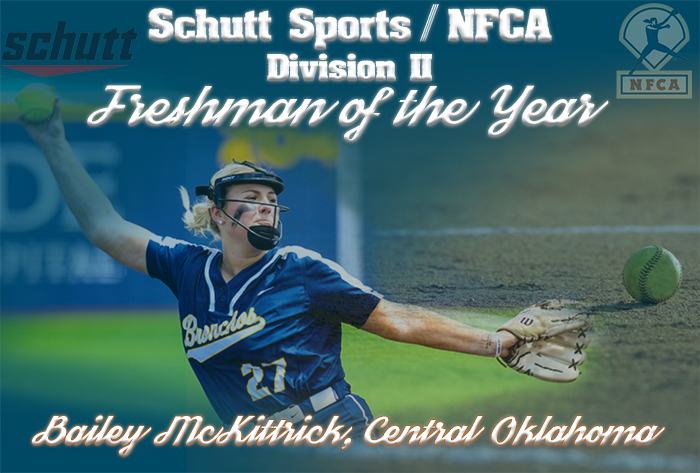 LOUISVILLE, Ky. –University of Central Oklahoma pitcher Bailey McKittrick was named the 2019 Schutt Sports / NFCA Division II National Freshman of the Year. She was presented the award on Wednesday evening at the NCAA Division II Championship banquet in Denver, Colo.

McKittrick, a Second-Team NFCA All-American keyed the No. 1- ranked Bronchos to Mid-American Athletic Association (MIAA) regular season and tournament titles, a No. 1 overall seed in the Central Region and an appearance in the NCAA Super Regionals. The rookie hurler was named the MIAA Pitcher of the Year after sporting a 26-5 record with a 2.11 ERA and 108 strikeouts in 179.1 innings of work. A native of Moore, Okla., McKittrick recorded three shutouts, 17 complete games, one save and held her opponents to a .238 batting average.

The award was created in 2015 to honor the outstanding athletic achievement among freshmen softball student-athletes throughout Division II.