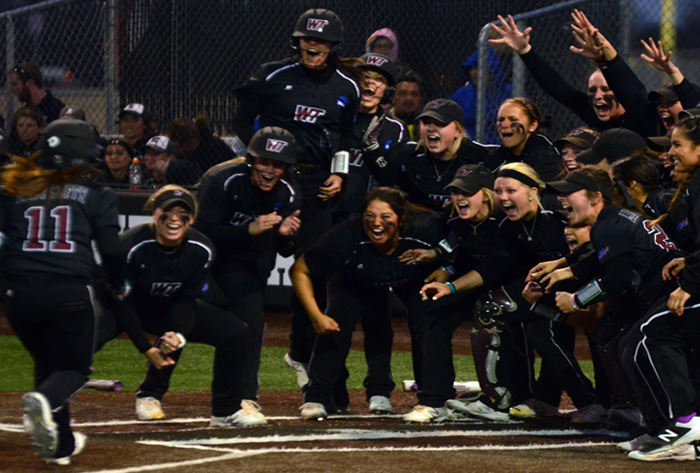 LOUISVILLE, Ky. – Courtesy of a 16-0 start to the season, West Texas A&M vaulted to the No. 1 ranking in the first 2016 NFCA Division II Top 25 Coaches Poll of the regular season. The Lady Buffs took home 12 of 16 first-place votes and 386 points.

West Texas A&M moved up 21 spots in a poll that saw a lot of movement and has several new faces. In all, eight programs join the rankings, including six that were not in the preseason poll. The Lady Buffs have put together an impressive start to the season, which includes wins at then-No. 2 Dixie State, versus then-No. 13 Humboldt State and No. 12 St. Mary’s. WT is batting .446 and averaging 11.8 runs per game, scoring seven or more in 15 of its 16 contests. They are also doing it in the circle, recording six shutouts and allowing two or fewer runs six other times.

The University Alabama in Huntsville rolls in at No. 2 with 365 points with the University of Indianapolis right on its heels at No. 3 with 364 points and four first-place nods. The Chargers (16-2) are currently riding a 13-game winning streak and own a victory over preseason No. 1 North Georgia, which also handed UAH one of its two defeats. The Greyhounds (3-0) opened their season last weekend with a pair of road wins at Montevallo (9-1 / 12-2) and triumph over West Georgia (6-1) in Florence, Ala.

Behind a 9-1-1 start, Humboldt State (338 points) rises to No. 4 from No. 13 and undefeated University of Missouri-St. Louis is your fifth-ranked program with 319 points. The Jacks put in a strong showing at the Dixie State’s tournament with a victory over the hosts (4-1) and a one-run defeat (3-2) to new No. 1 West Texas A&M. In its league opener, Humboldt State swept a four-game series at then-No. 25 and defending CCAA champs Cal State Monterey Bay. The Tritons (10-0) moved up two spots with their hot start and have not conceded a run in their last seven games.

Arkansas Tech (310) and Catawba (304) come in at No. 6 and No. 7. Coming off a four-game Great American Conference sweep against Ouachita Baptist, the Golden Suns (12-1) have mustered 10 straight wins, including an 8-2 defeat of then-No. 16 Missouri Western. The Indians are off to a 10-0 start, matching the school record for most consecutive wins, including an upset of then-No. 9 Georgia College (3-2).

North Alabama (278) joins the poll at No. 8 having recorded the most wins (18) in Division II. The Lions (18-4) started the season 10-0 and own two wins over then-No. 6 Valdosta State in Gulf South Conference play.

Rounding out the Top-10 is No. 9 California (Pa.) with 275 points and No. 10 Georgia College (261). The Vulcans bounced back from a season-opening setback to New Haven (3-2) with three wins over West Liberty (18-1), Winston-Salem State (6-3) and Felician (9-3). The Bobcats (13-2) opened with 12-straight triumphs, sweeping through their Bobcat Kickoff Tournament and Columbus State’s Cougar Classic, before dropping two of their last three to Catawba and Lenoir-Rhyne.