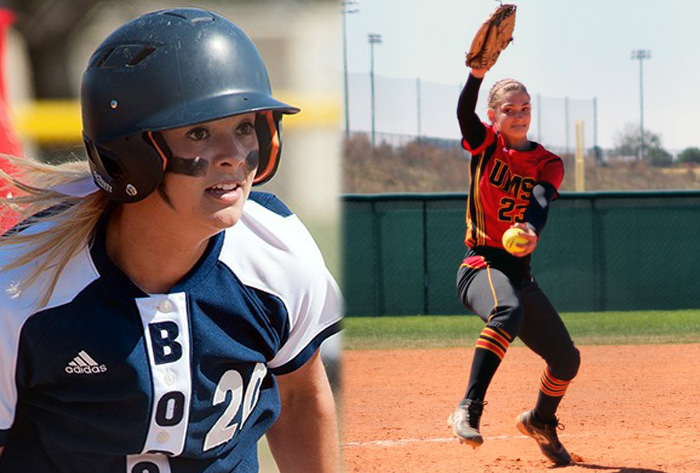 LOUISVILLE, Ky. –Washburn’s Taylor Zimmerman and University of Missouri-St. Louis’ Hannah Perryman were named the Louisville/Slugger NFCA Division II National Player and Pitcher of the Week, respectively on Wednesday afternoon. It is the first honor for Zimmerman, while the second this season and fourth overall for Perryman.

Zimmerman put forth a record-setting performance last weekend for the Ichabods. The senior second baseman hit .615 (8-for-13) with five home runs, 12 RBI and six runs scored. A native of Olathe, Kan., Zimmerman matched a school record with three home runs and seven RBI in Washburn’s first game of the weekend at Lincoln. She clubbed her fourth long ball in the second game of that doubleheader and drove in four more runs.

“I had been working hard all week on making solid contact in all the hitting drills at practice,” said Zimmerman. “The day before our game I watched film with coach and it helped me make a few small adjustments. On game day I just felt really good, I was seeing the softball really well and felt very confident up at the plate. Everything I hit I was focused on making solid contact. The hard work paid off by scoring my teammates and giving us the runs we needed to stay competitive. It takes a team to succeed and the base runners set the stage for me to score them and win some games!”

She capped off her week with her fifth homer, while going 2-for-4 with a RBI and run scored against Lindenwood. Zimmerman, the Mid-American Athletic Association Hitter of the Week, slugged 1.769 and recorded at hit in every game with three multi-hit contests.

“Taylor has been working very hard on perfecting her swing; spending extra time watching film and getting extra swings in at practice,” said head coach Vanessa Becerra. “I'm so proud of her and so happy that all of her hard work paid off this weekend!”

Hailing from Streamwood, Ill., Perryman went 4-0 with a 0.27 ERA and 45 strikeouts in 27 innings. The senior southpaw recorded a no-hitter and held her opposition to just one run and a .101 batting average at the NTC Spring Games in Clermont, Fla. The six-inning, eight-strikeout no-no against regional foe Findlay was the 13th of her career as well as her 47th collegiate shutout.

“I am super excited about being named National Pitcher of the Week for the second time this year,” said Perryman. “It's such an honor to be recognized for the hard work put into this season. I've been working on pitching to spots more and getting hitters off balance with my rise ball/change up. It's been a lot of fun pitching with the offense we have. I know that if I do make a mistake my team will have my back and scrap a few runs back. There's a lot of trust between us, which makes the pressure of games seem like nothing.”

Perryman punched out 16 Point Park batters in her final outing of the week as she reached the 1,300-strikeout mark and finished with 1,306 when the contest ended. In addition, Perryman was selected the Great Lakes Valley Conference Pitcher of the Week for the 14th time.

"Hannah had another incredible week,” head coach Brian Levin said. “She is not only holding opponents nearly scoreless, she is giving up less than three hits a game. As a coach, knowing that your pitcher is only going to give up three hits in any game she throws makes my job pretty easy. She is really a special player."