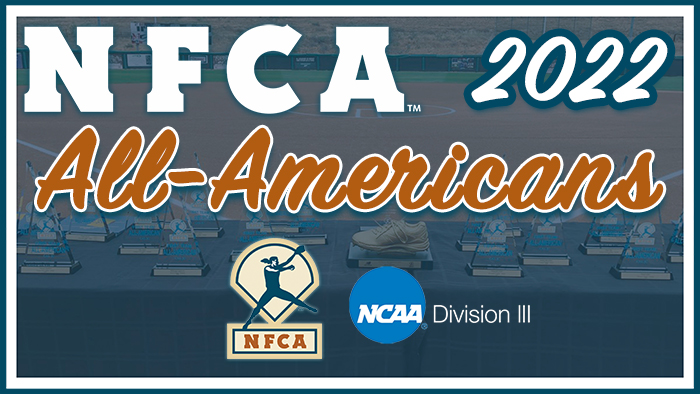 Eastern Connecticut State University leads all schools with four players selected, including three on the first team. Four others —Belhaven, Christopher Newport, East Texas Baptist and Salisbury — had three players chosen, while Berry, Bethel (Minn.), Concordia Wisconsin, DePauw, Linfield, Millikin and Texas Lutheran all had two award recipients. Salisbury, with two, was the only other program to place multiple players on the first team.

Berry sophomore Anna Jackson led the 11 two-time honorees, and also scored 2022 Diamond Sports/NFCA Catcher of the Year in recognition of being selected as the first-team All-America catcher. She is currently batting .397 with 39 runs, 56 hits, 12 doubles, four triples, nine homers and 42 RBI. Jackson is also a Top 25 finalist for the 2022 Schutt Sports/NFCA Division III National Player of the Year.

Wisconsin-Superior junior Kaela Kraemer, who was earlier voted the second-team All-Region shortstop in Region IX, is the 2022 New Balance/NFCA Golden Shoe Award winner, after a season in which she stole an NCAA Division III-best 71 bases and also ranked first in stolen bases per game (1.69). Kraemer finished fifth in Division III stolen base percentage at .947 (71-for-75).

Sixteen All-Americans are still playing, as members of six teams which reached the final eight in this year’s NCAA tournament, which resumes Thursday at the James Moyer Sports Complex in Salem, Va.

The Division III All-America teams are voted on by a committee of NFCA member coaches representing the NCAA’s 10 regions. They select 18 players for each of three teams, unless there is a tie for a third-team slot, in which case the tied players are both awarded honors. All players recognized as All-Region players were eligible for All-America recognition.