DePauw heads into NCAAs No. 1 in NFCA Division III Top 25 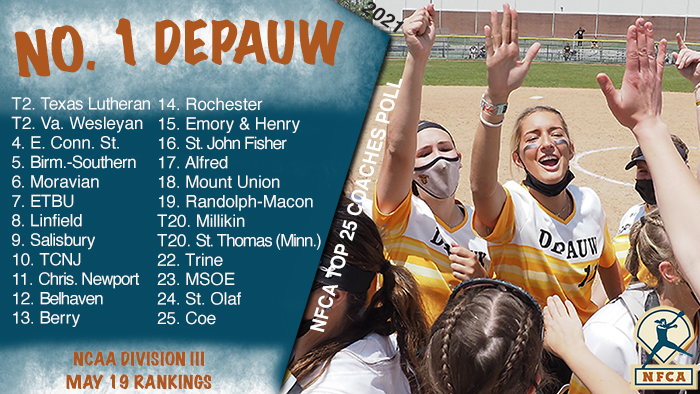 LOUISVILLE, Ky. — DePauw will be the No. 1 team in the NFCA Division III Top 25 when the NCAA tournament begins later this week.

The (34-2) Tigers swept Hiram in the best-of-three North Coast Athletic Conference championship over the weekend to claim their fourth straight NCAC tournament and extend their win streak to 18 games. DePauw, which has won 40 of its last 45 over the last two seasons, is the top seed in the Decatur (Ill.) Regional, and will play Mount St. Joseph (30-8) on Thursday in its NCAA opener.

Meanwhile, reigning national champion Texas Lutheran (28-4), the top team nationally the past three weeks, and Virginia Wesleyan (37-5-1), the No. 1 squad the two weeks before that, share the second position. The Bulldogs are the top seed at home in the Seguin (Texas) Regional, while the two-time national champion Marlins are the top seed and host for the Virginia Beach (Va.) Regional.

Eastern Connecticut State (30-2), fresh off its victory in the Little East Conference tournament, is the fourth seed in the Bangor (Maine) Regional, while fifth-ranked Birmingham-Southern (29-5) is the No. 3 seed in the Marshall (Texas) Regional, which will be hosted by No. 7 East Texas Baptist and also features second seed and ninth-ranked Salisbury (24-7).

The first 12 teams in this week’s poll, and 26 teams overall in the Top 25 or receiving-votes category will be playing later this week in regionals.

The NFCA Division III Top 25 Poll is selected by eight NCAA Division III head coaches representing the eight NCAA regions. Current records are listed, with first-place votes in parentheses. In 2021, schools that are not competing are not eligible for the poll.

There will be a final Top 25 ranking following the completion of the NCAA tournament.

Dropped out: Misericordia, Transylvania and Wartburg.