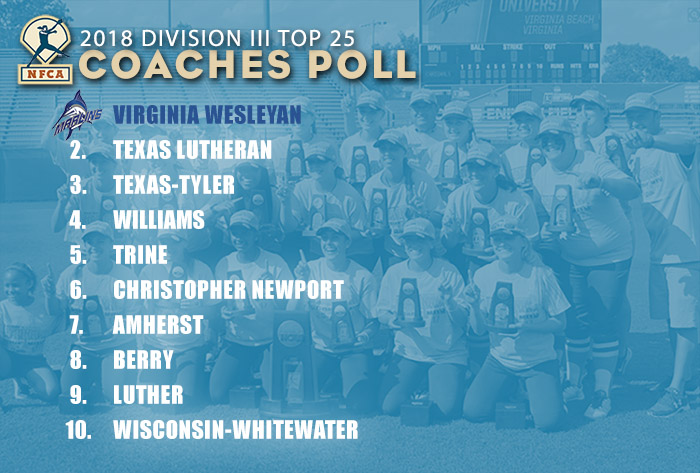 The (14-0) Marlins have been idle since winning the NFCA Division III Leadoff Classic on March 4 at Lincoln Park in Tucson, Ariz. They had been scheduled to play a home doubleheader against No. 6 Christopher Newport (8-2) on Sunday, but weather postponed that matchup to April 11, with the games now shifted to Captains Park in Newport News, Va.

No. 2 Texas Lutheran and third-ranked Texas-Tyler, meanwhile, both swept conference series last week. The (15-1) Bulldogs took four Southern Collegiate Athletic Conference games from the University of Dallas, including the last two by run rule, before opening a 12-game homestand with doubleheader sweeps of Mary Hardin-Baylor and Messiah earlier this week. The (12-1) Patriots gave up only two runs while scoring 25 in their three-game American Southwest Conference set with Sul Ross, before starting this week by winning the opener of its series with Concordia (Texas).

Fifth-ranked Trine (12-2) stayed in Arizona after the Leadoff and continued to impress, going 7-1 at the Tucson Invitational Games (TIG). Seven of its eight games at the TIG ended early due to the run rule. The Thunder return to action this weekend at the DePauw Invitational, which also includes No. 16 Illinois Wesleyan and Washington (Mo.), which is receiving votes in the poll.