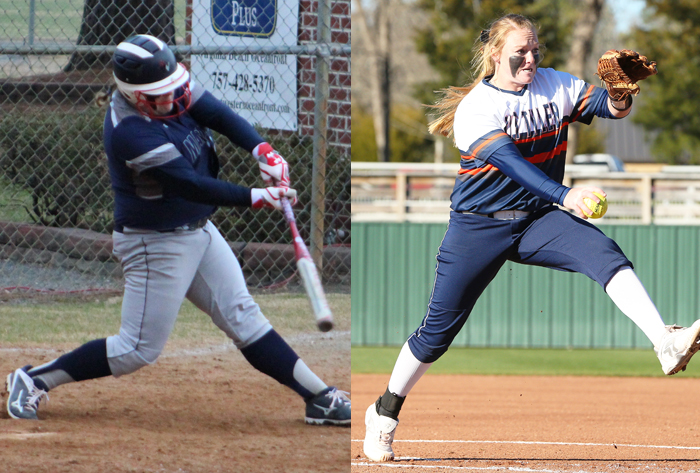 Howerin, a sophomore first baseman from Dover, Del., batted .700 (7-for-10) to help the Marlins jump out to a 5-1 start and move up to the No. 7 spot in the latest NFCA Division III Top 25. She scored six runs and had four walks, a double and three homers in four games this past week. Howerin homered in three straight contests and collected multiple hits in three of the four games while playing flawless defense.

Meanwhile, senior right-hander Batten has picked up where she left off last season for the top-ranked (8-2) Patriots, earning all three wins and tossing a no-hitter in the middle game of an American Southwest Conference sweep of LeTourneau. The 2015 NFCA Second Team All-American did not allow a run in 13.2 innings and needed just 59 pitches to complete her no-hitter. The Huntington, Texas, native opened the series with a four-hit shutout and came into the finale in relief to get the last two outs before Tyler scored in the bottom half to win.

Salisbury sophomore outfielder LeAnne Collins batted .529 with seven runs, a double, two triples and three runs batted in. … Concordia freshman shortstop Haley Dennett hit .474 with six runs scored, four doubles, two triples, two RBI and an .895 slugging percentage. She had four multi-hit games and scored at least a run in five straight games. … Gallaudet senior right-hander Kate Fetzer tossed a five-inning three-hitter in the Bison’s season opener, fanning nine and walking none. … Gallaudet sophomore utility player Jordan Hogan went 4-for-7 (.571) with three runs, a double, triple and two RBI in a sweep of Valley Forge and was perfect in the field (one putout, 10 assists). … Franklin junior outfielder Megan Lalioff hit .625 (10-for-16) with four runs and three RBI, including 4-for-5 versus Mount Union. She had two hits in all four games she played, and made five putouts and had an assist in a flawless week in the field. … Southern Virginia freshman right-hander Rachael Moore went 2-0 for the week, including a five-inning one-hitter and six innings of relief in a doubleheader sweep of Franciscan, while helping herself at the plate (4-for-7 with double and three RBI). … Franklin sophomore left-hander Olivia Paszek went 2-0 for the week with two complete games and a five-inning three-hitter against Houghton. … Franklin senior third baseman Katie Struewing was 7-for-16 (.438) with five runs, three doubles, a triple, homer and seven RBI in a 2-2 week for the Grizzlies.