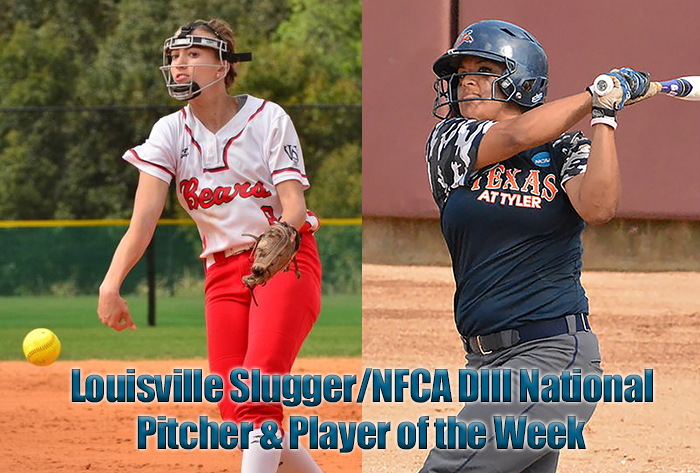 Lopez, a senior outfielder from Houston, batted .700 (7-for-10) with a double, five homers (including a grand slam), and 14 RBI in a three-game road sweep of Howard Payne for the top-ranked (20-2) Patriots. The Navarro College transfer had a double, two homers and eight RBI in the first game of the series.

Meanwhile, senior right-hander Pitkin earns her third Pitcher of the Week honor in just over a year’s time, following another strong week for the sixth-ranked (20-4) Bears, which included a 3-0 record in the circle, a save, one walk and 22 strikeouts in 13.2 innings. The West Springfield, Mass., native defeated Augustana (Ill.) twice — including tossing an one-hitter — and earned a win and a save against Wartburg.

SUNY Farmingdale senior catcher Meagan Anderson batted .556 (10-for-18) with a homer and six RBI. She has reached base safely in 11 straight games. … Rowan sophomore left fielder Mia Baldassari was 10-for-20 (.500) with six runs, a double and eight RBI. She had four multi-hit games and recorded a hit in each game. … FDU-Florham senior second baseman Nikki Caruso hit .615 (16-for-26) with 12 runs, three doubles, three homers and 17 RBI. … Lancaster Bible junior right-hander Kelsey Collins tossed a five-inning no-hitter versus Rosemont and struck out four over two innings in a win over Cairn, while also helping herself at the plate with a .615 average, eight runs, five doubles and a homer. … Lancaster Bible sophomore third baseman Julia D’Arrigo was 9-for-17 (.529) with 12 runs, three doubles, three homers and 12 RBI. She struck out just once in 20 plate appearances and notched two wins in the circle. … Hood sophomore shortstop Kristy Erfurdt batted .769 (10-for-13) with seven runs, two doubles, three homers, two walks and 11 RBI. She homered in three of her four games. … Manhattanville sophomore righty Alycia Feeney collected a win and a save in a 2-0 week for the Valiants. She tossed a five-hitter (six strikeouts) in the first game of a twinbill against King’s College and allowed one hit and struck out the side in the eighth in relief in game two. … Cabrini sophomore right-hander Jess Giordano had a 2-0 week individually and saved her team’s other victory. … Alvernia sophomore righty Taylor Fouracre had a 0.37 ERA in a 3-0 week that included a two-hit shutout of Swarthmore and five scoreless innings of relief against Lycoming. … Washington (Mo.) senior first baseman Brooke Hofer was 12-for-19 (.632) with two runs, two doubles and five RBI in a 6-0 week for her team. … Texas Lutheran senior third baseman Heather Hummel hit .556 (5-for-9) with a double, three homers and eight RBI. … New York University freshman outfielder Diana King was 4-for-7 (.571) with five runs, two steals, two homers and two RBI. She led off both games of a twinbill against Baruch with a homer. … Rutgers-Camden senior shortstop Katie Larson batted .520 (13-for-25) with 10 runs, five doubles, a homer and 13 RBI. The homer was her 100th career hit. … Cedar Crest sophomore shortstop Kaylee Martinez was 12-for-19 (.632) with 13 runs, five doubles, six homers and 17 RBI. She hit a grand slam versus Lehman. … East Texas Baptist senior right-hander Kelly Jo McLendon struck out 13 and walked just two over 20 innings in a 3-0 week. She tossed a two-hit shutout of Texas-Dallas in a series opener and fanned a season-best six in the third game of the series. … Guilford freshman outfielder Sabrina Moreno hit .421 (8-for-19) with seven runs, a double, triple, four homers and 11 RBI. … Rutgers-Camden senior righty Brittany Scott was 4-2 with an 1.59 ERA and 42 strikeouts in 35 innings. She had a five-inning perfect game (nine strikeouts) against Southern Vermont and helped herself at the plate with a .481 average and 14 RBI. … Wheaton (Ill.) senior right-hander Katie Thornton had an 1.40 ERA in a 3-0 week, fanning 18 batters in 20 innings, while also hitting .500 at the plate. … Piedmont junior righty Sarah Walker was 5-0 for the week with two victories over previously unbeaten (in USA South) Averett. … Randolph-Macon freshman right-hander Candace Whittemore notched three wins in four appearances, with three complete games, one earned run and 19 strikeouts over 23.1 innings.