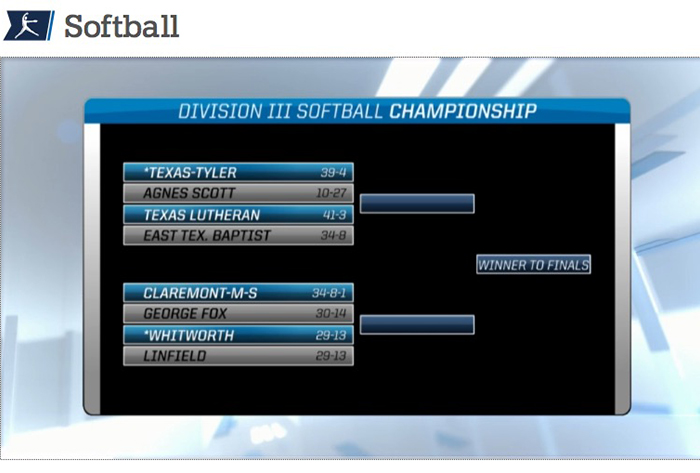 INDIANAPOLIS — Eight past winners, including three-time defending national champion Tufts, plus 2015 runner-up Texas-Tyler headline the 62-team field for the NCAA Division III Tournament, it was announced during a live webcast on Monday afternoon.

All but one of the teams in last week's NFCA Top 25 made the tournament field, with top-ranked Virginia Wesleyan (38-5) hosting a regional that also includes No. 2 Salisbury (34-4), Saint Vincent (28-13) and Haverford (21-19). No. 3 Texas-Tyler (39-4) hosts a regional that also features No. 8-ranked and 2010 national champion East Texas Baptist (34-8), which defeated the Patriots on the same home field twice in two days two weeks ago en route to the American Southwest Conference tournament title, fifth-ranked Texas Lutheran (41-3) and Agnes Scott (10-27).

Six of the seven teams receiving votes last week also scored berths, including Cortland (35-9), St. John Fisher (33-10) and Whitworth (29-13), which will all host, and Illinois' Wheaton College (31-12), which will be playing in its first NCAA tournament. Whitworth's regional includes two-time NCAA champion Linfield (29-13).

Four teams each will play at 14 regional sites and there will also be two regionals consisting of three teams apiece, with games played May 12-14 or May 13 and 15. Winners of those regionals will advance to super regionals on May 20-21. The finals will be held May 26-31 at the James I. Moyer Sports Complex in Salem, Va.

Forty-three conferences had automatic bids for their champions into the tournament field, while the 19 others earned at-large berths into the championship.

To watch a replay of the NCAA selection show, click HERE