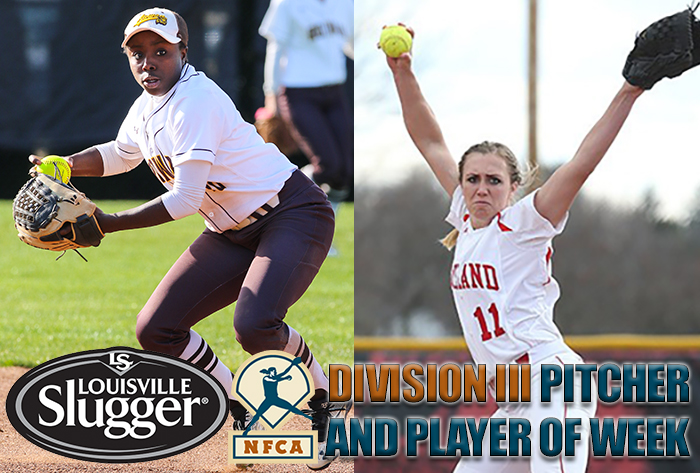 Snead, a senior shortstop from Malaga, N.J., batted .727 (8-for-11) with five runs, a double, three steals and three RBI. The leadoff hitter slugged .818 and had an on-base average of .750 while playing flawless defense as the 15th-ranked (35-8) Profs captured the New Jersey Athletic Conference Tournament championship.

Messiah senior pitcher Courtney Allen earned three wins while holding opponents to just five runs and 11 hits over 17 innings as the Falcons won the MAC Commonwealth title. She also hit .750 (6-for-8) at the plate with four RBI to collect tournament MVP honors. … Keuka junior pitcher Brianna Bush recorded a win and a save in two appearances, with a complete game, two earned runs, one walk and four strikeouts over 10 innings to earn the NEAC Tournament MVP nod. Both games were against regular-season league unbeaten (20-0) Penn State Berks. … Manhattanville sophomore pitcher Alycia Feeney pitched a six-hit shutout in a 3-0 win over FDU-Florham in the MAC Freedom championship game. She also scored wins in the Valiants’ first two tournament games en route to MVP honors. … Tufts junior first baseman Cassie Ruscz set a NESCAC tournament record for both homers (four) and RBI (12) as the Jumbos reached the championship round against Williams. She had a grand slam in an 11-run first inning of game six against the Ephs, which helped force a decisive seventh winner-take-all game in which she contributed a two-run homer. She also scored five runs herself and had a hand in 17 of Tufts’ 28 tournament runs.

The Louisville Slugger/NFCA Division III National Player and Pitcher of the Week are selected by Division III head coaches representing the eight NCAA regions. This was the final week of selections for the season.