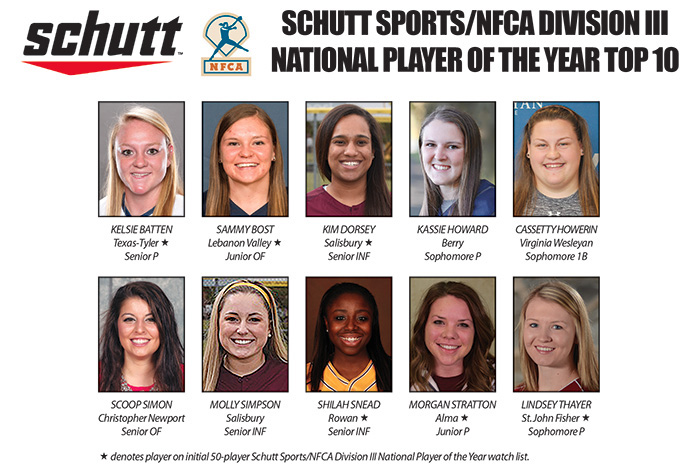 LOUISVILLE, Ky. — Ten outstanding softball players remain in the running for the inaugural Schutt Sports/NFCA Division III National Player of the Year award, which will be presented at the conclusion of the 2016 season.

No. 2-ranked Salisbury University still has two players — seniors Kim Dorsey and Molly Simpson — on the list, while eight other schools have one player apiece.

The list started at 50 and was paired down to 25 two weeks ago. A list of three finalists will be chosen next, with the winner announced after the NCAA Division III championship at the end of the month.

There are five seniors, two juniors and three sophomores in the current group. The six hitters have combined for a .481 average, 136 extra-base hits and 271 RBI so far this season. The four pitchers, meanwhile, have teamed to compile an 102-16 record (.864 win percentage), 36 shutouts, 84 complete games and 967 strikeouts in 767.2 innings.

Among the 10 finalists, six players — Batten, Bost, Dorsey, Snead, Stratton and Thayer — were in the initial group of 50. All 10 players remaining earned first team All-Region recognition for the 2016 season earlier on Monday.

The list is a collaborative effort between the NFCA’s Division III Head Coaches and All-America committees. The original list of 50 players contained 26 returning NFCA All-Americans, including four first-team honorees, nine second-team selections and 13 from last year’s third team. The remaining 24 members of the first group all earned first team NFCA All-Region recognition last season. Thirteen players from the initial list made the cut to 25, while the remaining 12 players on that list of 25 were newcomers.

Schutt Sports and the NFCA are also presenting a Division III National Freshman of the Year award for the first time this season.