Texas Lutheran back on top in NFCA Division III Top 25 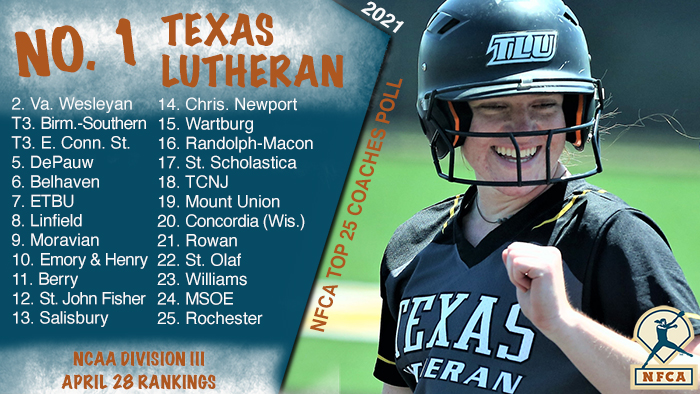 LOUISVILLE, Ky. — Defending national champion Texas Lutheran is back as the top dog in the NFCA Division III Top 25 Coaches Poll for the first time since the third week of 2020.

The (27-4) Bulldogs have outscored their opponents 254-58 this season, and head into Friday’s Southern Collegiate Athletic Conference Tournament on a 19-game win streak. They have now won 23 of their last 24, and are 46-5 since beating Emory, 6-1, on May 27, 2019 for their first Division III national championship.

As a team, Texas Lutheran is hitting .391 on offense, while compiling a 1.89 earned-run average on defense. They have been ranked no worse than fourth this season, including second the last two weeks.

Meanwhile, Virginia Wesleyan (31-5-1), which won the two NCAA titles before the Bulldogs, slipped to second this week following two weeks in the top spot. The Marlins crammed eight games into six days, but lost two of those to unranked squads. Virginia Wesleyan starts its quest for a fifth-straight Old Dominion Athletic Conference crown on Saturday.

There is a tie at No. 3 between unbeaten Eastern Connecticut State (20-0) and Birmingham-Southern (28-4). The Warriors stayed put this week after climbing 12 spots over the past four polls, while the Panthers gained three places after claiming their second-straight Southern Athletic Association Tournament title on Sunday.

The rest of the first 13 were unanimous for the committee, while undefeated Williams (9-0) and Rochester (23-6) were the two new teams voted into the Top 25 this week.