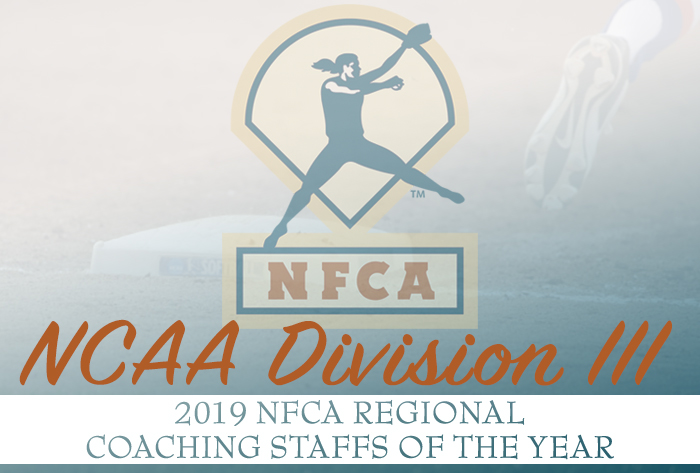 Texas Lutheran University took top honors in the West, while four other teams that reached the NCAA championship in Tyler, Texas, garnered recognition in their regions. Third-place finishers Trine and Eastern Connecticut State were the pick of their peers in the Central and New England regions, respectively, while fifth-place finisher Illinois Wesleyan was the Great Lakes honoree, and seventh-place finisher St. Thomas was the pick in the Midwest.

Lynchburg, which lost to eventual national runner-up Emory in the NCAA super regionals, was the choice of NFCA member coaches in the Atlantic Region, while The College of New Jersey earned East honors, and Ithaca got the nod again in the Northeast.

Led by head coach Wade Wilson and assistants Olivia Van Hook, Dennis Moe and Ed Zarzabal, Texas Lutheran (40-8) advanced to its first NCAA championship and went a perfect 5-0 there to claim the first Division III softball crown in school history. The Bulldogs defeated Emory twice on May 27 in the best-of-three championship series to earn the title to complete a stretch during which they won 19 of their last 20 games.

This is the fourth-straight honor for Illinois Wesleyan (39-10) in the Great Lakes, and the second-consecutive award for head coach Tiffany Prager, who along with assistants Nikki Miller, Kimmy Hassel, Bob Grimes and Lyle Day, and Director of Softball Operations Stephanie Alvarez-Rivera, guided the Titans to their fourth-straight NCAA championship finals appearance.

Ithaca (28-9-1), meanwhile, earned its second-straight Northeast honor, going 11-1 in Liberty League play and winning its second-straight Liberty tournament title. Unfortunately for the Bombers, they ran into a red-hot Williams team in the NCAA super regionals, which denied them a 13th trip to the championship finals site in head coach Deb Pallozzi’s 31st and final season at the helm. Assistant coaches include Rinae Olsen, Dan Raymond, Payton Cutting and Stacey DiGiorgio.

Donnie Danklefsen’s Trine staff of Brittany Harvey and Dennis Smith captured their third accolade in the last four years, also winning regional honors in 2016 and 2017. The (37-8) Thunder advanced to their third NCAA championship finals in the last six years under Danklefsen, who has guided the team to 12 consecutive NCAA regionals, and four super regionals over the last six seasons.

Eastern Connecticut State (36-13) won two games at the NCAA championship site and came within a run of advancing to the best-of-three finals, losing 3-2 in eight innings to Emory in the NCAA semifinals. Every one of the Warriors’ four games in Tyler were decided by one run, including a 7-6 loss to eventual national champion Texas Lutheran in the day-two nightcap, in which they scored three runs in the bottom of the seventh. Head coach Diana Pepin was vying to add a national championship as a coach to the one she won as a player at Eastern in 1990. Her assistant coaches include Mark Correia, Tom Madera and Dawn Brolin.

Dawn Simmons’ Lynchburg (37-15) squad knocked off two-time reigning national champion Virginia Wesleyan in the NCAA regionals, and scored two runs in the bottom of the seventh of the third game of the super regionals against Emory to fall just short of advancing to Tyler. The Hornets finished the year with eight victories against ranked opponents and the second-most wins in school history. Her assistants are Mike Jennings, Audra Della Rosa, Danielle Powell and MacKenzie Mount.

The College of New Jersey (33-8) won 23 of 24 games — and 10 straight contests — heading into NCAA play, but dropped two regional games to end its third 30-victory season in the last four years. Along the way, head coach Sally Miller’s Lions captured both regular season and tournament titles in the New Jersey Athletic Conference, with the help of assistants Val Suto and Gina Massaro.

These eight coaching staffs move forward to consideration for NFCA Division III National Coaching Staff of the Year. Voting is open for member coaches through 9 p.m. ET on June 14, with the announcement of the winner on June 17.