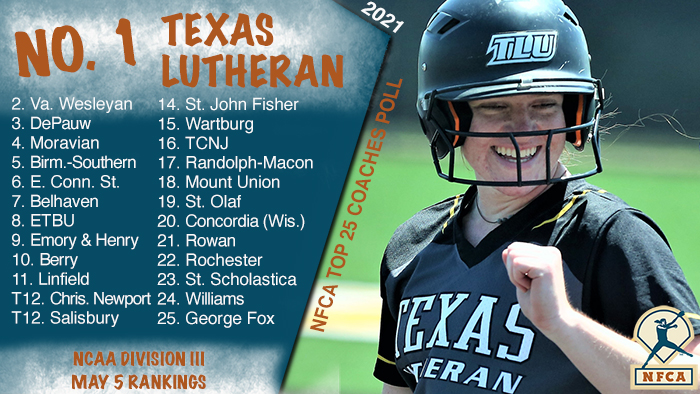 The (28-4) Bulldogs defeated Centenary (La.), 2-1, on Monday at Schreiner’s Mountaineer Field on Rebecca Snow’s walk-off single with the bases loaded and two out in the bottom of the seventh. Snow had tied the game an inning earlier on a homer to right center.

Meanwhile, Virginia Wesleyan (33-5-1) kept rolling along in the No. 2 spot, winning twice against Shenandoah in Saturday’s Old Dominion Athletic Conference (ODAC) tournament to advance to today’s first two games of a best-of-three semifinal round against Roanoke. In the first game against Shenandoah, two-time Schutt Sports/NFCA Player of the Year Hanna Hull broke the Division III record for career wins with her 125th, passing Coast Guard’s Hayley Feindel, who collected 124 victories from 2009-12.

DePauw (31-2) moved up two more spots this week, to third, on the strength of its 15-game win streak, and Moravian (26-0) went from ninth to fourth after winning its 30th straight game going back to the last four games of 2020.

Elsewhere, Randolph-Macon (14-7-1) was idle but dropped a spot to No. 17, after being forced to miss last week’s start of the ODAC tournament due to COVID-19 protocols. George Fox (27-9), fresh off a four-game split with then-No. 8 Linfield, is this week’s poll newcomer at No. 25.