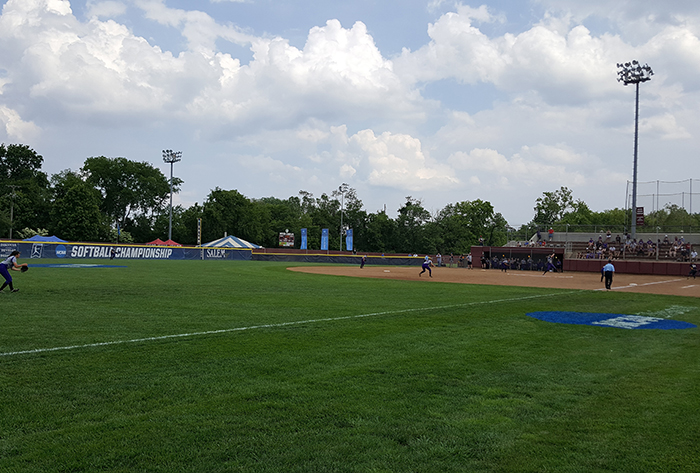 SALEM, Va. — Texas-Tyler will be looking to take care of some unfinished business when it plays 2009 national champion Messiah on Monday in the first two games of the best-of-three championship series at the 2016 NCAA Division III Softball Finals at the James I. Moyer Sports Complex.

The (47-5) Patriots defeated St. John Fisher, 6-0, on Sunday in the third meeting of those two teams at this year’s NCAA Finals. Four-time NFCA All-American Kelsie Batten had an one-hitter working and retired 11 straight Cardinal batters until giving up two hits in the bottom of the seventh and yielding to Alaina Kissinger for the final two outs.

KK Stevens’ solo homer leading off the three-run second proved to be all the runs the Patriots would need, but they added one insurance run apiece in the fifth, sixth and seventh innings anyway. Stevens, All-American Raven Rodiguez, Bianca Van Veirah, Cheyenne Thompson and Kristin Lopez all had two hits and Texas-Tyler racked up 13 hits as a team against All-American Lindsey Thayer in her lone non-dominant outing of the championship.

Sophomore Thayer, who reached 750 career strikeouts with 14 in the first of her two wins Saturday — an one-hit shutout of Massachusetts Institute of Technology — fanned 37 over her four games in Salem. She threw every pitch for St. John Fisher at the event, tossing a three-hitter (seven strikeouts) and four-hitter (nine strikeouts) in the Cardinals’ first two meetings with Texas-Tyler. In her other game, Thayer retired 13 straight and struck out seven in a two-hit Friday shutout of St. Thomas.

Sarah Kubik’s double was the only extra-base hit Sunday against the pair of Patriot pitchers.

Messiah (47-4) heads into this year’s championship series as the only unbeaten team at this year’s NCAA Finals, winning its first three games by an average of seven runs and outscoring its trio of opponents, 21-8, including defeating Rowan, 9-1, in six innings on Saturday. All-American Courtney Allen both pitched and played great defense in that victory, allowing four hits and one run over the first 4.1 innings, before promptly making an over-the-shoulder diving catch after shifting to center field. The game’s starting center fielder, Amber Bingaman, made two stellar plays herself before moving to right field for Allen.

Erin Cressman and Brooke Pompeo both homered in the triumph, Amanda Jones had three hits, including a triple, and Cressman drove in four runs to guarantee Messiah at least a national runner-up finish in Salem.

Game one of the best-of-three championship series starts at noon ET, with the second game to follow. A third game, if necessary, will be at 3:30 p.m. Tuesday.