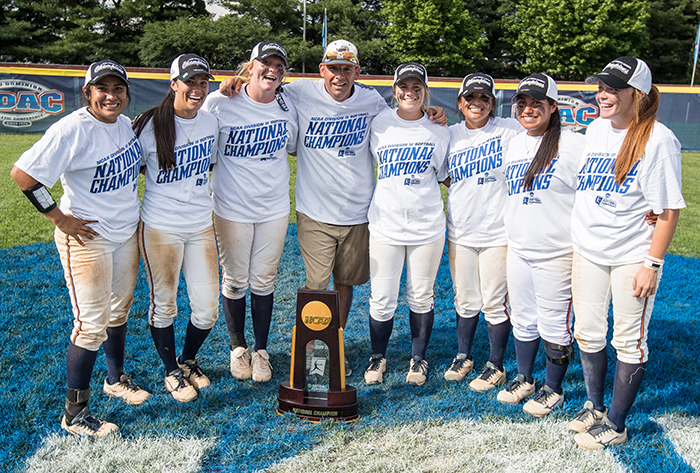 SALEM, Va. — The University of Texas at Tyler swept two games from Messiah College in the best-of-three championship series on Monday at the James I. Moyer Sports Complex to capture its first NCAA Division III national softball championship.

The (49-5) Patriots won the first game, 3-0, and the second, 7-0, while outscoring their opponents 30-1 over six Salem games to avenge a loss to three-time titlist Tufts University in last year’s championship.

Schutt Sports/NFCA Division III Player of the Year top three finalist and four-time NFCA All-American Kelsie Batten was named tournament Most Outstanding Player after winning four games at the event. She recorded a career-high 10 strikeouts in the first championship series game earlier in the day and then struck out four more in 2.2 innings in relief of Alaina Kissinger in the decisive second game.

Texas-Tyler took control with a five-run third and never looked back. Raven Rodriguez doubled in the Patriots’ first run and Vanessa Carrizales drove home three more with a double of her own. Lexi Ackroyd singled up the middle to plate the final run of the frame.

Kaylee Prather (three hits) led off the seventh with a triple and promptly scored on Rodriguez’s sacrifice fly. Carrizales hit a two-out solo homer to cap the scoring.

Erin Cressman and Shannon Denny had the only two hits in the game for Messiah (47-6), which set a school record for wins in a season, four more than its national championship run in 2009.

In the first game, Texas-Tyler broke a scoreless tie with all three of its runs in the top of the seventh. Carrizales drove in the first run with a fielder’s choice, while KK Stevens and Bianca Van Vlerah (3-for-3) each singled home a run apiece. Cheyenne Thompson singled and tripled in the contest.

Becky Notte had two of the Falcons’ four hits in the loss.

Messiah (47-6) headed into this year’s championship series as the only unbeaten team at this year’s NCAA Finals, winning its first three games by an average of seven runs and outscoring its trio of opponents, 21-8, including defeating Rowan, 9-1, in six innings on Saturday.