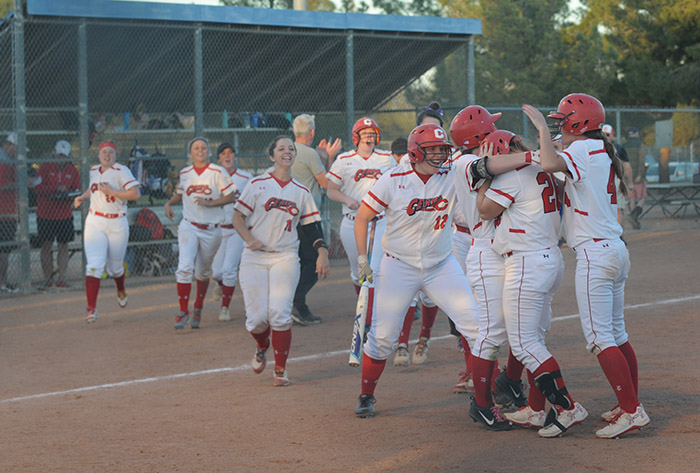 TUCSON, Ariz. — Heading into the final day of the 2018 NFCA NCAA Division III Leadoff Classic at the Lincoln Park Complex, there is a three-team race for tournament champion honors.
Texas Lutheran (6-0), Trine (4-0) and Virginia Wesleyan (12-0) are all 4-0 after the first two days of the 32-team tournament, winning two games each on Saturday.
The No. 9 Bulldogs defeated second-ranked St. John Fisher, 4-3, and No. 24 (tie) Berry, 9-7, while sixth-ranked Trine also topped the Cardinals, 9-7, and beat Messiah, 12-4 in five innings. Top-ranked defending national champion Virginia Wesleyan scored a pair of run rule-shortened victories, 10-2 over No. 13 East Texas Baptist in five innings, and 18-3 over Birmingham-Southern in six.
Texas Lutheran and Virginia Wesleyan play each other in their final game at 11:30 a.m. on Sunday, which could well determine the Leadoff championship. In their first game, Texas Lutheran faces No. 24 (tie) Babson, which is 2-2, while the Marlins play Rochester (0-4). Trine, meanwhile, has games Sunday against East Texas Baptist (6-2) and Otterbein (2-2).
Outside the top three, there were a few late-game and extra-inning heroics on day two.
Pacific Lutheran (6-6) evened its tournament and overall record with a 6-5 win in eight innings over Claremont-Mudd-Scripps. The Lutes fell behind 4-0 after two-and-a-half innings, but were able to claw back with one run in the bottom of the third, two in the fourth and the another in the fifth. After the Athenas reclaimed the lead, 5-4, in the top half of the eighth, Becca Sorensen evened the score with an one-out RBI single and Kennedy Robillard delivered the walkoff single.
In a contest that featured five lead changes, Central outlasted DePauw, 11-10, in a wild eight-inning affair. After the squads exchanged early leads, the (2-2) Dutch used a four-run fifth to grab a 7-6 advantage. That lead lasted until the top of the seventh, when the (3-3) Tigers’ Kat Panos knotted the game with a homer to left.
In the eighth, DePauw scored three runs to grab a 10-7 lead. However, Central drew even in the bottom half on a pair of RBI singles and a fielder’s choice. After a walk loaded the bases, Emily Walton laced a single up the middle to win the game.
Nine teams have just one loss heading into the final day — Berry, Christopher Newport, Claremont-Mudd-Scripps, George Fox, Linfield, Massachusetts Institute of Technology, Pacific (Ore.), St. Catherine and Whitworth.
All 32 teams play two games apiece on each of the three days. An All-Tournament team will be recognized at the conclusion of Sunday’s final day, in addition to the champion and runner-up teams. To keep track of the teams during the Leadoff, visit our NFCA.org Tournament Central by clicking HERE. For tournament photos, click HERE